Where do new advertisers start? 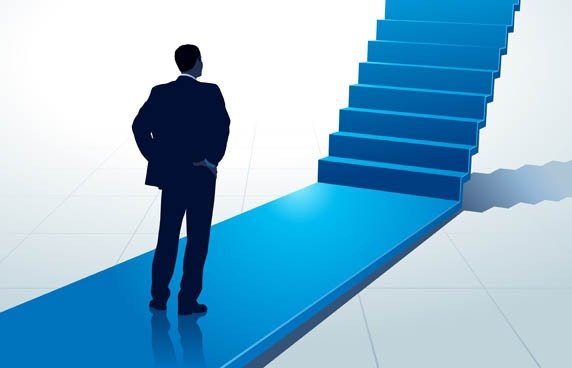 How does a small business new to online advertising take the first step?

A common place to start is with a campaign on Google AdWords, and this makes a lot of sense. Google is the most visited destination on the web and paid search advertising lets businesses reach an audience that is explicitly looking for information, products, and services.

Setting up an AdWords campaign is comprised of a few main tasks - creating your ads, including your relevant audience with targeting, adding keywords and keyword bidding, and setting your campaign schedule and budget. I went over this process in a post a while back, which you can read it here. The bottom line is that for a new advertiser, this isn't the easiest process.

If the advertiser wants to test another network, it would be nice to avoid recreating everything they have already built and spent time on for their AdWords campaigns. It would be much faster to import their campaigns into another large ad network like Microsoft's Bing Ads.

Luckily, this feature exists and it's called "Import From Google AdWords". Using the Bing import tool is easy enough.

Start by clicking on "Import From Google AdWords": 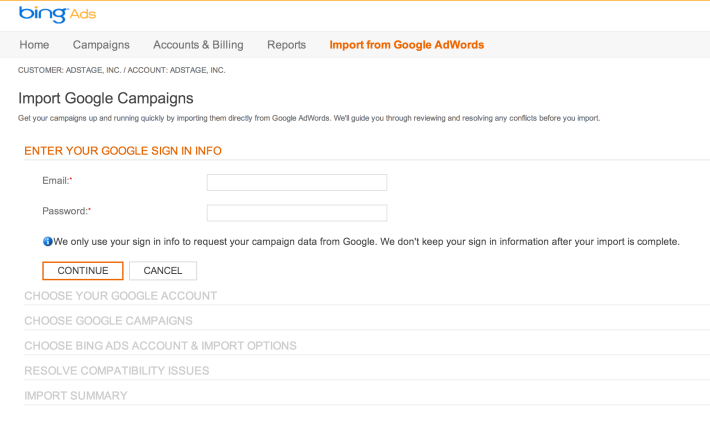 Once you're on the importing page, you can see the various steps needed to complete the import from AdWords. After you've filled in your account AdWords account information so Bing can fetch your data, you'll see your active AdWords campaigns to choose from (you can also click the checkbox to also see your paused campaigns).

Check the campaign(s) you want to import: 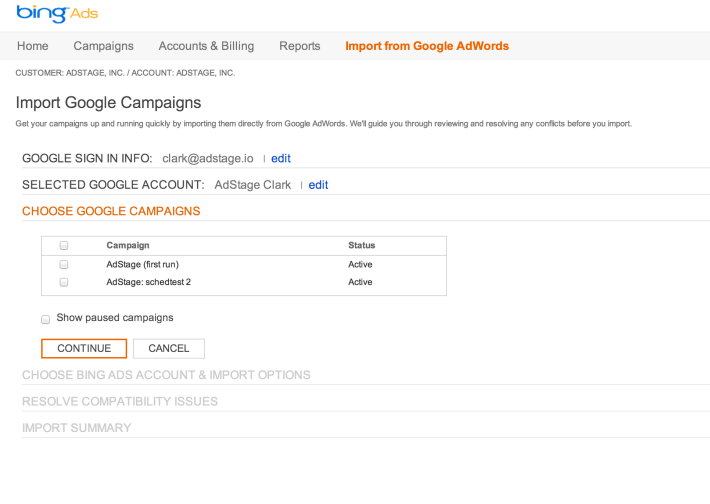 Select the options from your AdWords campaign that you want to import:

Click Import, and you'll either see errors that need fixing or a summary of your import.

If there were any errors during the import, you'll see them here. Included are errors and warnings for campaigns, ad groups, ads, keywords, and ad extensions. If you're importing a campaign that is completely new to your Bing Ads account, there shouldn't be any errors. If there is an error (ie. your keyword is a duplicate), you'll need to fix the error in your AdWords campaign, and start the import process over again.

A successfully importing campaign's summary tells you the new, updated, and skipped features from the campaign so you have a good idea of what's been imported into your Bing Ads account. Your campaign will be up and running on Bing! 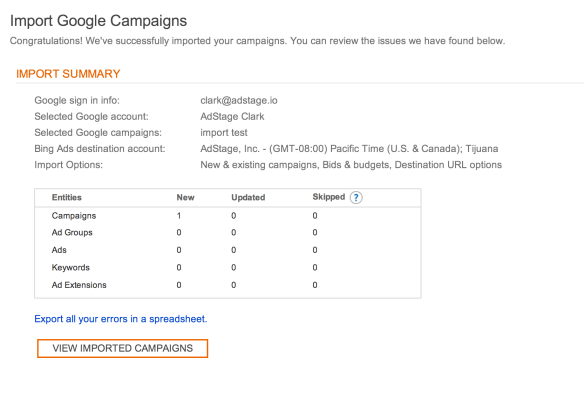 That's the best way to quickly bring your AdWords campaign into Bing Ads, but as we're seeing, many advertisers are trying other networks and mediums like Facebook and LinkedIn to reach a large audience in different contexts (ie. search, and now social as well)

If you want to launch campaigns quickly and easily across multiple networks like AdWords, Bing Ads, Facebook, and LinkedIn from one place, you can check out the AdStage Platform. We help you get campaigns running quickly and we give you tools like our recommendations and insights to make sure you're building the best possible ad campaign to reach and convert the customers you're looking for.