Facebook has figured out mobile. What was once a threat has now become 53% of their ad revenue and has contributed to some serious earnings growth. In honor of this impressive feat, let’s take a look at how companies with mobile apps can profit with Facebook's mobile app install ads, mobile app engagement ads, and the new mobile app custom audiences.

[Tweet "Mobile is now 53% of Facebook's ad revenue. Learn how to profit from mobile with them."] 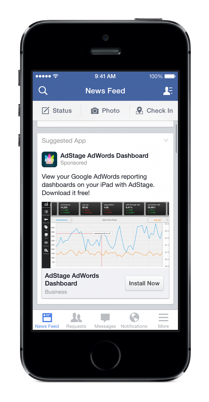 First announced in late 2012, Facebook’s mobile app install ads have become an industry standard and are a proven way to drive installs and increase app discovery. They’re set up just like traditional Facebook ads, however, rather than directing people to a webpage, you can link them directly to your listing in the appropriate app store.

For example, I could promote the AdStage iPad app with a Facebook mobile app install ad. It will then display to people who like AdWords when they’re using the Facebook app on their iPad. The ad will display directly in their newsfeed and will encourage them to install it directly on their device, by way of our App Store listing.

Facebook even provides an SDK that you can install in your app to track installs generated from your ads. You can also use the SDK to exclude people who already have your app installed from ever seeing your ads. This means all of your ad spend can efficiently go towards installs.

But for many apps, especially free apps, getting an install is only half the battle. To make money, you’ll need customers to use the app again and again. So how do you keep your app from being forgotten? You can drive people who already have your app installed to engage by using Facebook's mobile app engagement ads. These ads help encourage users to open up the app and take a specific action once inside (there are 7 call to action buttons to choose from).

For example, an education app could promote their latest tutorial to their users. And rather than seeing a button with “Install Now,” they’ll see “Watch Video.” Clicking the button will launch your app and deep link them directly to the featured video in the app! 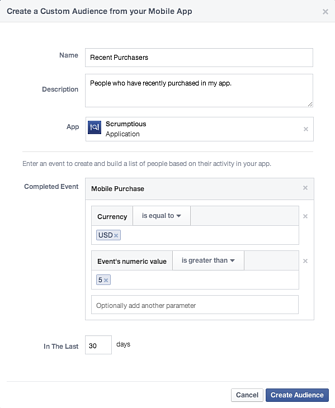 On Tuesday, Facebook revealed an even more exciting update to its mobile app ads. Now you can advertise to people who have taken specific actions in your app– this is a really powerful way to segment your audience to hit them with timely messages. It’s just like Facebook’s custom audiences, except there’s no need to upload any files, you simply define the event.

For example, JackThreads used an early version of this feature to target people from their mobile app who added items to their carts but didn’t actually checkout. Advertising to cart abandoners earned them an 8x return on ad spend!

With this full suite of mobile app ads on Facebook, you can be clever with your ads. You can drive new app installs, promote engagement to people who already have it installed, and reach segments of your users with targeted messaging to monetize your installed base.

So what goals do you have for your mobile app and how can these products get you there? Create a mobile app campaign today so your profits can soar like Facebook’s!