Have you heard the news? Facebook is rolling out a brand new campaign structure. The goal of the new structure is to make it easier for you to organize, optimize and measure your ad performance. So how exactly does it work and how can you make the most of it? I’ll explain all you need to know about the change and how to take advantage of it right here.

Up until this change, Facebook campaigns had two levels: campaigns housed ads directly. Your schedule and budget lived at the campaign level and your objective, bid and targeting lived at the ad level.

Now, campaigns have an additional level between campaigns and ads called “ad sets.” Search advertisers may liken this to the “ad groups” used in Google and Bing campaigns, but there are some big differences. In this new structure, you’ll create campaigns for each of your objectives. Then you’ll create ad sets with their own schedule and budget (that’s right, budget is on the ad set level).  Ads still include their unique bids and budgets, but they no longer include the objective since that’s already been set at the campaign level.

Take a look at this table to see the features available for each of these entities:

How It Will Affect You

Every single account will be migrated and the changes will roll out to every interface: the Facebook Ads create tool, Ads Manager, Power Editor and even third-party ad tools like AdStage. Facebook will migrate your account to the new campaign structure sometime between March 4 - 30, 2014. You’ll know you’ve been migrated when you see ad sets added to your campaigns.

What Will Happen to Your Existing Campaigns 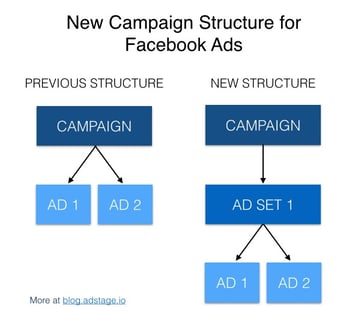 All of your ad campaigns (even the ones you’ve deleted) will be migrated to the new campaign structure and will now have one ad set containing all existing ads.

Facebook says this won’t change the delivery, spend, reporting or performance of ads in your existing campaigns, but you want to revisit your schedules, budgets and ad sets to make sure they match your campaign goals.

In light of these changes, you’ll want to structure your Facebook ad campaigns a little differently moving forward.

Once you've been migrated to the new structure, make sure to share your tips and tricks in the comments below!