Earlier this week, Facebook introduced ad scheduling to their ad platform. This long-requested feature, known in the industry as dayparting, lets you turn your ads off and on automatically throughout the week on a recurring schedule.

In this post, I’ll walk you through the new feature to show you how you can use it to optimize your Facebook Ad campaigns and offer my first impressions of the implementation.

Ad Scheduling is now available in the Facebook Power Editor

Dayparting unlocks another dimension of Facebook campaign optimization. It lets you turn off your ads at the times of the day or week that they are less profitable. It’s a great way to limit wasted spend so you can devote your budget towards the more profitable times of day.

For example, let’s say you’re promoting a nightclub. You may find that your ads have lower click through rates and conversion rates on Mondays. It makes sense, maybe your audience is still recovering from the weekend and going to a nightclub is the last thing on their mind.

If you’ve identified this is a trend, you might want to go ahead and schedule your ads to turn off on Mondays. Or maybe you decide to go all out and limit your ads to just Thursdays, Fridays and Saturdays from 3-11pm. If those are the highest performing times of the week for your campaigns and you have a limited budget, that’s the way to go.

Learn How to Analyze Hourly Facebook Performance with Google Analytics.

To Set an Ad Schedule

2. Navigate to an Ad Set

3. Scroll down to Ad Scheduling. If the option is grayed out, you’ll need to switch your budget from daily to lifetime (more on this below). 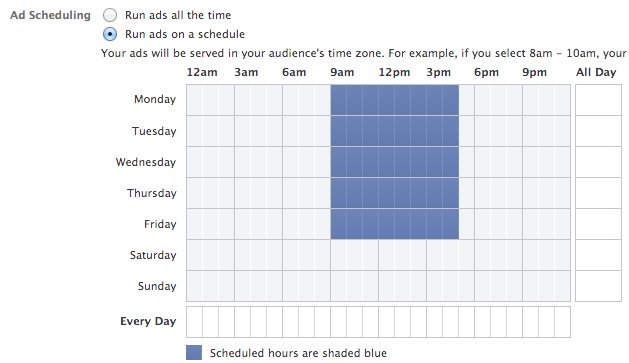 Now just click and drag across the grid to highlight the hours during which you’d like your campaigns to serve.

The new ad schedule setting is only available in the Power Editor – Facebook’s native ad management tool – and the Facebook Ads API, but not the Facebook Ad Manager.

No Bid Modifier - Day-parting brings a deeper level of optimization to Facebook and brings it closer to what AdWords offers, but not to parity. In Google AdWords, you can also adjust your bids by time of day, which gives you the ability to optimize your bid based on your predicted conversion rate for that time. For example, if clicks in the middle of the night are half as profitable, you could reduce your AdWords bids by 50% until the morning. Facebook's implementation is a great start, but there's room for improvement. To edit your bids by time of day, use the new AdStage Automated Rules app.

Ad Set Level Scheduling - For now, Facebook only lets you turn an entire Ad Set on or off so keep that in mind as you structure your campaigns and Ad Sets. To schedule on the campaign level, use the new AdStage Automated Rules app

Lifetime Budget Required - I find it odd that ad scheduling doesn’t work for Ad Sets set to use a daily budget and I imagine having to set a lifetime budget for the campaign will be a deal-breaker for some advertisers. To configure a schedule while maintaining your daily budget, use the new AdStage Automated Rules app

Time Zones - Note that Facebook ad scheduling uses your audience’s time zone and not yours. Unless you limit your targeted locations to those of a single time zone, your campaigns could be running at any time of day. This is a great if you want to tailor ads to your audience’s schedule (e.g., when they're just waking up) but bad if you want to tailor ads to your business’s schedule (e.g., when your call center is open). To specify the time zone your schedule should use, use the new AdStage Automated Rules app

Granularity - The schedule can be set in 1 hour increments, which won't be a high enough level of granularity for many advertisers, especially when you're optimizing campaigns with a lot of data. To configure a schedule with 10 minute increments, use the new AdStage Automated Rules app

Fun UX - I must admit, it's pretty fun to click and drag around the grid to customize your schedule. This is a refreshing break from the rest of the Power Editor, which can be pretty unintuitive.

What do you think? Does Facebook’s new ad scheduling meet your needs?