Let’s face it, Twitter advertising can be scary….scary enough that a lot advertisers try to avoid it all together. Well rest assured, like any beast, it can be tamed. In this post, I will give you some helpful tips to step up your Twitter Ads game and create campaigns with confidence.

Twitter has over 284 million active monthly users, and over 1 billion tweets are generated every 2 days. Those active users aren’t just kids tweeting about the latest Kim Kardashian news, but they’re also comprised of business decision makers, managers and consumers alike. According to the AMA, 78% of executives are using Twitter everyday for business purposes.

Given those huge numbers, it’s obvious that there’s a ton of opportunity on Twitter to reach your target audience with effective ads. First, lets take a look at some ways to set yourself up of success.

Budgets have been known to exhaust very quickly in Twitter, and by the number of active users above, you can see why. Be very restrictive with how you target, and try not to go crazy with interests and followers initially. Broadening your audience like that will likely result in wasted budget, low relevance and a very poor return on ad spend. Instead, see how a smaller target audience will react to your ads, and respond accordingly.

2. Be Decisive with Calls-To-Action

People have very short attention spans; sometimes they just need to be told what to do. So tell them!

Pro Tip: If Retweets are your goal, don’t write “RT”. Spell it out; it just looks better. It will also likely be more effective in the beginning of the ad.

The whole point of testing is for this purpose. If you have a certain demographic that is working well for you, then build off that, and target similar demographics. For instance, say you are targeting followers of Facebook, Google and Twitter, and you find that Facebook followers have a higher engagement rate than the others. You can use Twitter’s search and find usernames like Facebook to help find more engaging folks. 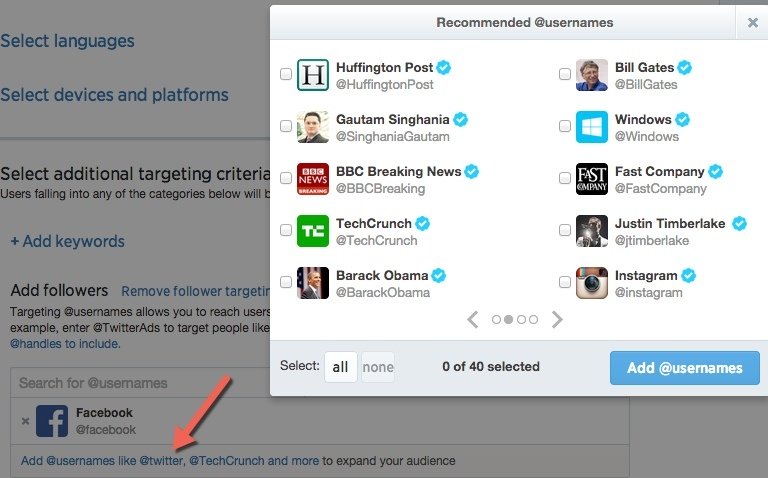 This is particularly easy in AdStage, because we have built in the feature of Ad Groups, so you can easily test content across different demographics in a single campaign. However, you can also do this test natively; you would just build several campaigns and split your budget up amongst them.
Test content versions, iterate - Create 2 or 3 cards, only changing the call-to-action on the first go. Once you have enough data to declare a winner, test that call-to-action with different images. Continue this process until you’ve found your winning combination. Then, you can test your best card across different demographics.  *Need help with Twitter cards? Sam wrote a great post to help you here.

According to Twitter, 80% of users access Twitter on mobile. This statistic is important, because if you post content at the wrong time, (say, during most people’s morning commute) and your site is not mobile friendly, then you’ve likely cost yourself a lot of money for a poor return.

People interact with things they know and find familiar, so coming out of nowhere with tweets may not provide the results you desire. Stick to 2-3 tweets/day, promote 3 or 4 a week, and you should soon see a steadier engagement rate.

8. Create a Sense of Urgency

Remember that Twitter has a real-time, in-the-moment nature, so use this to your advantage with content like limited time offers that inspire consumers to quickly respond.

Now, lets take a look at some ways you could shoot yourself in the foot. In short, don’t do these things.

You’ve seen this nonsense before. Don’t be that guy. Hashtags are great for conversational tools and finding content; just don’t use them for anything else!

You want your value proposition to be clear and not pushed out because of a ton links in the tweet.

All feedback is good feedback.  You can even respond by saying you’ll address the issue offline; that works too. Just don’t publicly ignore criticism, as it makes your business look indifferent to customer concerns.

Being socially engaged will keep your brand relevant and increase your likability.

People want to know you are human and not a robot. You do want to provide relevant content for your business, but humanize your tweets a little bit.

Twitter can be an intimidating beast in the world of online advertisement. However, I’m a firm believer that if there is a market out there, patience and proper strategy will bring you success, even in the Twitterverse.