Counting Down to Sales in AdWords Ads Just Got Easier

Well, it seems like Google has just one upped me, making part of my last post somewhat obsolete...but either way, everyone wins! Google has integrated the ‘Countdown’ logic into its own ad creation with its countdown widget; which I have to say, is way easier to use than implementing a script or filling out a document with arguments and other criteria.

How To Set Up a Countdown

To get started, navigate to the AdWords interface and type “{=” into a description line in your text ad. This text will automatically trigger the new Countdown widget. 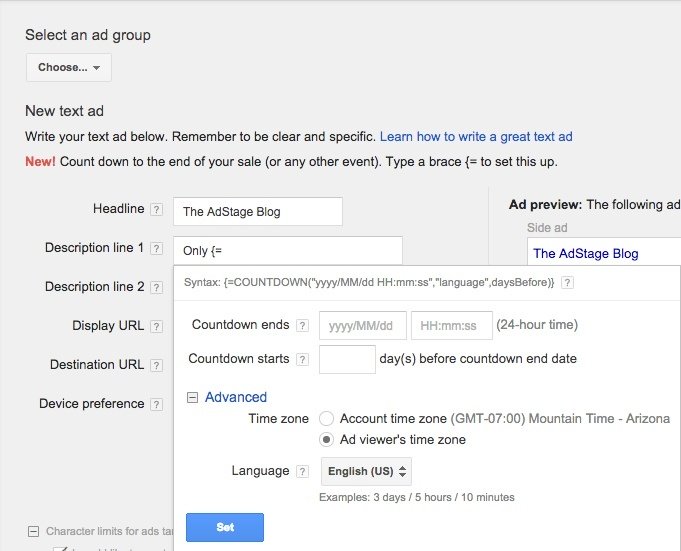 Next, fill in the start and end dates for your countdown.

You get the option to use the ad viewer’s time zone, or your account timezone to display the countdown, as well as the language you would like the countdown to display. The advanced options are nice because they give an extra layer of customization to agencies or those operating across multiple time zones and languages.

There are many different applications for ‘Countdowns,’ while most think of sales as the main use case. Here are a few other uses.

Pro-tip: Create one or two ads for mobile only; you’ll want to be sure to put the countdown in the beginning of the ad so that the urgency is there on mobile devices.

Creating urgency in ad text is one of the best ways to engage customers, and Google’s countdown feature makes creating time-sensitive ads much easier. It will be interesting to see if other networks work this type of functionality into their own ad creation. I could see this feature doing very well in social advertising.  Finally, if you don’t have it in your account, be patient– according to Google, the feature will be rolled out over the next few weeks.  If you do have it, though, consider yourself lucky!

Have other great ideas for using the countdown in your ads? Post them in the comments!