As LinkedIn Advertising partners, we work with several sophisticated marketers who are truly making the most of advertising on LinkedIn. On the flip side, however, we get a lot of questions about some of the subtler challenges of running LinkedIn Ads.

People want to know: What is the secret to LinkedIn Ads? Is there a minimum time frame or test budget that must be allocated for success? How do you optimize your targeting? Why is it so “expensive?”

Over the years, we’ve hosted virtual events to educate advertisers about LinkedIn, spoken with hundreds of cross-network PPC advertisers, and worked closely with LinkedIn employees themselves to make sure we know all the ins and outs of their platform. Today, I’m sharing real questions from these experiences and real LinkedIn advertiser answers.

Be sure to checkout How Much Do LinkedIn Ads Cost? [Q1 2018 Report]

1. Have you seen a correlation between audience size and duration of campaign that drives success?

A: When you have a large audience size and a large budget, you’re likely going to saturate that audience over the course of two to four weeks. On the other hand, if you have a very small budget, like around $50 per day, the chances of you fully saturating an audience of 30,000 to 100,000 users are very low.

Audience size and how fast you’re reaching them through your budget will dictate campaign success. If you want to roll into that backwards, I would run the same ad content over one to two months (longer for smaller budgets) and watch the performance over time.

View your click-through rate (CTR) view to gain insight into what’s happening to your CTR over time. You’ll know you’ve reached the point of saturation when you see the graph take a sharp turn downward. At that point, you’ll know that you need to freshen up your campaigns.

2. What is the minimum audience size that’s recommended for LinkedIn Ads?

A: LinkedIn’s minimum audience size is 1,000, and we’ve run quite a few campaigns right around the 1,000-person size for very small niche groups. But, you’ll need to think about if this is worth your time. It’s going to take the same amount of time to target 30,000 users as it is to target 5,000 users.

And, let’s say with a good CTR, your 5,000 audience size may turn around six clicks per month. Is it worth your time having to create that campaign separately? If you look at it that way, those clicks must be worth a lot of money to be worth your time.

3. What are recommendations for B2C targeting? How do you use the options available for targeting when you’ve got a clear demographic but it’s not tied to an occupation?

A: LinkedIn obviously lends itself well to targeting occupations, but if you know your audience well enough and that persona is very developed, you can use the business targeting for a B2C play. For example, Nissan is an active B2C brand advertiser on LinkedIn. Here’s an example of  Sponsored Content that was shown in my news feed. 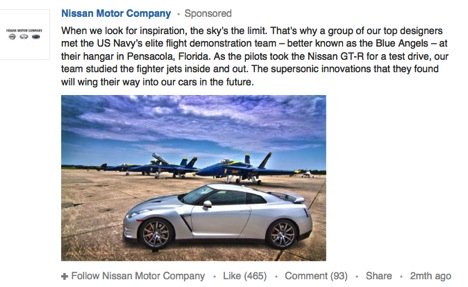 A slightly different B2C use-case is when other channels cost more than a click on LinkedIn. For example, some clicks on AdWords can be > $125 so paying $7 per click on LinkedIn, while not as targeted, could be seen as getting a huge discount.

Conversion rates can be lower with LinkedIn as you pay less for that traffic. If you can make the targeting work for you, I highly recommend it.

4. Does overlap targeting lead to competing on your own campaigns?

A: With LinkedIn Ads, if you have any campaigns with overlapping targeting, the platform will not allow you to compete against yourself. It will take your relevancy score in a pre-auction phase from both campaigns and both ads that are competing for the impression, and will choose to serve one of them based on the auction at hand.

5. If I am targeting two different regions, how do I ensure my ads are running evenly in both places?

There isn’t a true automated way of doing this to make sure impressions are split evenly, but some tools (like AdStage) allow you to set Automated Rules. For example, when the U.S. campaign has spent > $1,000, the software can automatically pause it, and wait for the U.K. campaign to catch up in delivering impressions.

6. Which ads are more successful for conversions: Sponsored Content or Text Ads?

A: We haven’t seen a huge difference in conversion rates between the two, but we have seen that there are certain offers that work better than others for these ad formats.

In looking at advertisers in various verticals, we’ve seen that these two products end up costing around the same amount on a cost-per-click basis for any given advertiser. So if you have a limited budget and are deciding which creative to run, I’d recommend Sponsored Content because we typically see a 10x higher CTR over Text Ads, and these units take up a lot more real estate on LinkedIn. You undeniably get more fields and a bigger image with Sponsored Content — for a similar cost per click.

7. Do you know how LinkedIn decides when to serve Sponsored Content images as “full screen?” Is there a secret sauce for getting the ad to take up more real estate?

A: With Sponsored Content, you can either run a content update or an image update, and the only real difference is whether you’re bringing in a piece of content or the URL of an image. With the latter, you will get the larger image size and take up more real estate. However, because you’re choosing an image, you’re losing some elements that would come with a content update, such as a headline and description.

With the image update, you are only allowed an intro. We’ve heard from several marketers who are really making this work in their favor. You can optimize this by bringing in a larger image and including a link to your landing page in the intro. This can be very effective for things like infographics.

If you’re just bringing in normal content, the way the user views the content will make all the difference. If it’s viewed from the desktop, your image will be 180 pixels wide, which isn’t a whole lot of real estate. If the same ad is viewed on a tablet, however, it may be 1200 pixels wide.

So the image size will vary by device and by type of Sponsored Content. We highly encourage you to test all of the above, as different audiences will react differently to your creative.

8. Which text field is more important for CTR and conversion rate, the intro text or the description text?

A: We recommend that you continue to perform tests using variations of these to see which is most impactful, but based on our experience, we’ve seen the most variance when testing the intro field.

With a simple A/B test of one or the other field, you can see the impact your ad text has on conversion rate. If, in your testing of the description text, you see the most variance in performance between test versions, you can conclude that description is the most important for your situation. Alternatively, if varying the intro text has the most profound impact, you can put more emphasis on that field. AdStage has a great Ad Scrambler that allows you to create ad variations at scale and compare the results.

It’s important to note that the description text is actually only displayed on the desktop. If 60% of your LinkedIn Sponsored Content impressions are served on desktop computers, that means a full 40% of impressions served (those that appear on mobile devices) won’t include the description.

The only two fields that will consistently be shown on all devices are your intro and headline, so adding a call to action in the description may not be necessary.

9. When you change your creative, do you need to make a brand-new ad, or can you edit the content in an existing ad?

A: For Sponsored Content, you won’t be able to edit launched Sponsored Content, so you’ll just have to recreate it. For text ads, on the other hand, you can change change anything about the ad and it will reset the relevancy score.

If you change title, description or image, it will reset the relevancy score, and it should give you a fresh shot.

A: When switching to CPM bidding, if you’re not bidding high enough, your ad may not be in the first Sponsored Content slot in LinkedIn’s feed. This means your ad could have been pushed down so far as to be the tenth item in the feed.

Have any other questions about LinkedIn Ads? Drop them into the comments section. We love talking about all things LinkedIn!

Editor's Note: This LinkedIn Ads content was originally posted on MarketingLand in June, 2015.