With their latest update, the exact match targeting is getting bundled with the close variant targeting algorithm, which now ignores word order and function order. In this post, we’ll cover exactly what’s changing with the switch from exact match targeting, what you can do to mitigate any surprises on your end, and what experts are saying this means for the PPC world.

Rewording and reordering from close variant targeting will now include exact match targeting in AdWords. Close variant targeting not only ignores plurals, typos, abbreviations, and adverbs, but will also be broadened to ignore word order and function words. This means ads may be delivered when queries use a different word order or function words. Sadly, this limits the amount of control advertisers have over ad delivery, and further dilutes exact match targeting.

How this Update Affects Advertisers

The Google philosophy is as follows: capture as much traffic as possible with a wider net, then filter out what you don’t want, rather than building a smaller net that might not be big enough to catch everything you want. They’d prefer you spend money on some bad keywords than risk missing out on some potentially good ones.

Because of this, Google removed the ability for advertisers to opt out out of close variants in 2014. This means advertisers are being forced to place more trust on Google’s machine learning algorithms. This is obviously a smart way for Google to make more ad revenue, as they’ve claimed that early tests show advertisers could see an average of 3 percent more exact match clicks while maintaining similar click-through and conversion rates.

Below we’ll walk you through how the close variants are changing:

Function Words Could Be Ignored, Changed, or Added

Below are more examples from Google:

In some cases, two keywords can share the same meaning, and when they do, Google may reorder the keyword in order to deliver your ad. It’s important to note that word reordering will never add words to your keywords or the search query. For example, “buy new cars” and “new cars buy” likely mean the same thing from an intent standpoint. Exact match will use that same logic to match ads with reordered variations of your keyword.

However, similar to the function words exception, Google claims your keywords will not be reordered to match with a query if it changes the original meaning of those keywords. For example, the keyword [SFO to JFK] will not match to the query “JFK to SFO” because the destination and search intent is different. Below are a few more examples of how words can be reordered when using exact match with close variants.

How to Reduce the Impact From These Updates

Let’s face it. There’s no way around this global change and you’re not going to stop advertising on Google because of it. Because this update puts the onus on advertisers to explicitly state what queries they don’t want their ads to show up on rather than the ones they do want, it is important that advertisers be more diligent than ever about digging through search query reports and thinking ahead to prevent unintended consequences when word order matters.

As the exact match targeting update is rolling out over the coming months, here are a few things you can do in that timeframe to reduce the impact these changes have on your campaigns: 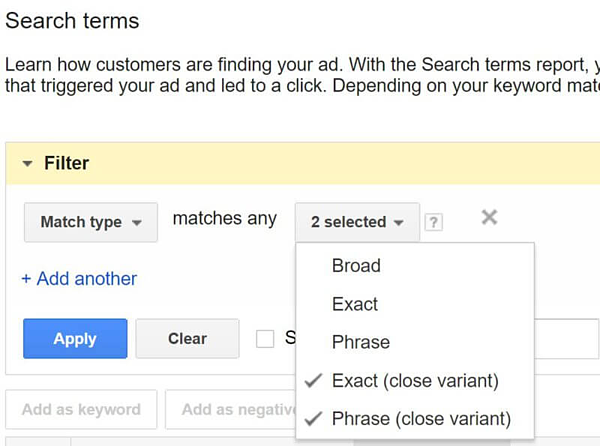 It's been a week now since the announcement and the PPC community has been buzzing with feedback about the exact match targeting update. We asked some of the leaders in the search world for their thoughts: 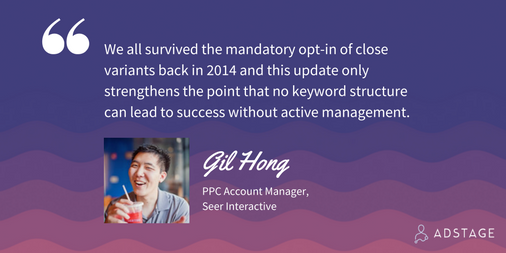 "As control freaks, this update spells doom and gloom to our tidy and structured accounts. But as marketers, this could mean additional query growth and less "Low Search Volume" keyword status.

We all survived the mandatory opt-in of close variants back in 2014 and this update only strengthens the point that no keyword structure can lead to success without active management. In the meanwhile I plan to schedule out some more SQRs." 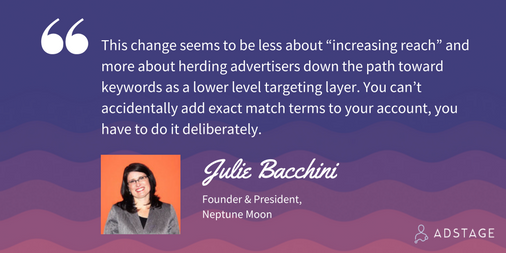 "This change seems to be less about “increasing reach” and more about herding advertisers down the path toward keywords as a lower level targeting layer. You can’t accidentally add exact match terms to your account, you have to do it deliberately. And, what the change actually does is already covered in AdWords by using the broad match modified match type for target keywords. It’s clear that Google is viewing related queries (or “close variants”) as fully interchangeable, so if that does not work in your particular situation, it is going to require more vigilance and work to try to keep the majority of queries matching for your preferred phrasing." 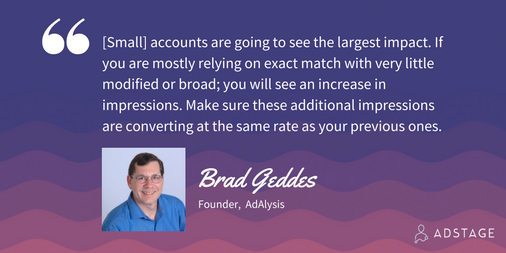 "Most accounts: Accounts that use combinations of exact and modified broad won't see any more impressions. Their biggest issue will be year over year bidding or traffic moving from one ad group to another one in trending data.

The rare word order account: When word order or word variations matter, either in meaning or click values, then you need to watch the changes closely. If Google gets it right, then it might not be worth the effort to manage this closely. If Google gets the meaning wrong, then you will need to do a lot of work in order to properly manage which ad groups are receiving the clicks and their associated bids.

Small accounts using mostly exact match: These accounts are going to see the largest impact. If you are mostly relying on exact match with very little modified or broad; you will see an increase in impressions. Make sure these additional impressions are converting at the same rate as your previous ones." 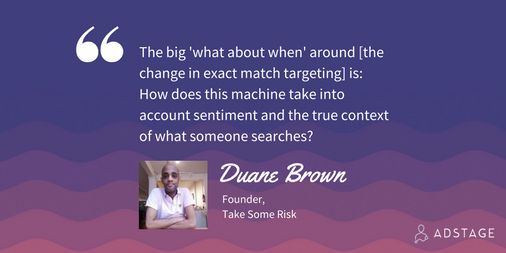 "At first I'm thinking this gives us less control. Google simply wants to push out more ads to make more money. When you dig into their statement around machine learning and think about all the data they have on how we search. I start to think if anyone can pull this off, it’s Google. The big "what about when" around this is how does this machine take into account sentiment and the true context of what someone searches. 20% of searches every day have never been done before and if that stat is still true.... what would the machine do in those cases? It has no reference for something that hasn't happened yet."

"Inexperienced businesses will be hurt the most because they don't know all the intricacies of AdWords. But if you have an established account, with a long history of appropriate negatives, I believe you won't see a huge impact unless word order matters. If I'm a Wisconsin company selling a cheese head, I don't want to show up when someone is searching for head cheese. Look it up. Two WAY different products."

"I'm not too concerned about the AdWords exact match update. For years, Google has been allowing close variants to show. As long as PPC Specialists have tightly themed ad groups and constantly review search query reports, these close variants can help efficiency. I don't see the mentality changing with how exact match will now be triggered. As long as advertisers remain steadfast reviewing their queries, there shouldn't be major issues."

"With changes like this sometimes there's a "the sky is falling" response and in the end it doesn't turn out as bad as everyone thought. It's still unclear how exactly it will affect performance, but it's making us rethink some of our fundamental strategies around keyword, adgroup and campaign structure. I'm less confident in exact match campaigns and adgroups and more worried about what I'll find in the search query report for exact match terms.  The "golden years" of true exact match ended with close variants a couple years ago, and while this continues the trend of less control, there are still many many levers we can pull to optimize and improve our digital campaigns. I'm still optimistic about the PPC future." 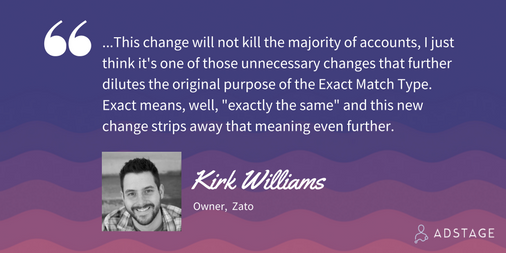 "I understand the reasoning for Google's changes in AdWords, and think this is simply a logical progression from their previous close variants change in the Exact Match Type. Google is trying to make it easier for higher-intent terms to be bid on in advertisers' accounts who haven't taken the time to find and add every possible query into their account. Makes sense, right?

On the other hand, frankly, I and many others were already ensuring this was happening by including tightly controlled Broad Match Modified and/or Phrase keywords in our accounts to pick up these "exact close variants". Thus for us, the change is redundant and unnecessary in our accounts (though admittedly it can now force these exact close variant matches out of lower bid BMM keywords and potentially provide better immediate bidding accuracy on those semantically matched terms in the future - as I have written here: Match Type Segmentation Wins with Google's Exact March Matchness Update).

My thoughts are that this change will not kill the majority of accounts (I believe some high CPC, probably B2B, terms that have multiple meanings will be hit hard with this), I just think it's one of those unnecessary changes that further dilutes the original purpose of the Exact Match Type. Exact means, well, "exactly the same" and this new change strips away that meaning even further."