Ever wonder if your ads are competing for visibility in the Facebook auction? Or how much they're competing against each other?

There’s a lot that goes into determining who sees which ads on Facebook. Put simply, there’s too much content available to be able to show people everything they could potentially see on Facebook, every day.

Back in early April 2017, Facebook announced on their blog a newly redesigned Delivery Insights dashboard as a way to help advertisers better understand the performance of their ad sets. It shows you metrics about your ad delivery, the dynamics of our ad marketplace and how the two are related to each other.

This tool isn't exactly new though. It's been around for over a year. However, with the redesign, Facebook dropped the tool from the Ads Manager menu tab in favor of being available in the UI.

Early feedback from advertisers is positive highlighting how actionable the data was been for investigating issues.

"Delivery Insights and notifications have empowered our team at Smule to be proactive in investigating campaigns that display sudden shifts in performance. The Audience Overlap and Audience Saturation tabs, in particular, give us actionable data which contribute to spend allocation and campaign optimization decisions. These tools have become part of our daily process in User Acquisition."

Finding your Delivery Insights is an unpredictable challenge. All Delivery Insights metrics apply at the ad set level (rather than the campaign or ad levels). They will appear in the Delivery column under Active for Ad Sets that meet these three requirements.

You may also receive a business notification when a qualifying ad set experiences a performance shift that you can follow to go to the dashboard. It's always available and can be tricky to find if you're not in Ads Manager frequently.

Audience saturation is the point at which your performance starts to drop as your ad frequency rises. If your First Time Impression Ratio is low, and the outcomes you care about are declining (conversions, for example), it may be time to change your creative or targeting.

Note: Auctions occur at the ad level, but Facebook shows you aggregated data for the Ad Set, because that's where audience targeting is selected.

The number of times your ads were viewed. Good to understand at a daily view over seven days looking for any highs or lows and trends. For example, 5/08/2017 has nearly double the amount of impressions compared to the day prior. Now I can review audience saturation, auction overlap, and activity history to find out why.

The number of people who saw your ads at least once over the lifetime of your campaign.

Facebook auction overlap is when you have multiple ads that are eligible for the same auction. This is caused by audience overlap between ad sets in the same account. When your ads are in the same auctions, Facebook prevents you from bidding against yourself and remove all but the most competitive ad in the auction.

Ad Sets with high auction overlap are more likely to under-deliver because they have fewer opportunities to be shown to people.

Audience overlap means you're targeting multiple ad sets to different audiences that contain some of the same people. This is not necessarily a negative situation, but because we try to avoid showing individuals too many ads from a single advertiser in a short period of time, it could make it more difficult for each of those ad sets to spend its full budget.

The percentage of times that this ad set overlapped in the auction with another of your ad sets, causing it to be removed from the auction. This number refers only to the percentage an ad set contributes to your total overlap, regardless of how much or little there is. For example, if your ad set's Auction Overlap Rate is only 10% overall, one ad set could be contributing to 60% of that overlap. 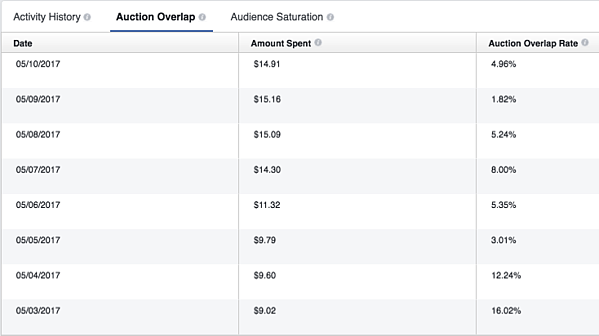 This number can be useful when figuring out how to merge Ad Sets. For example, it'd probably be more effective and efficient to merge a poorly performing Ad Set into one that's leading to 75% of its auction removals rather than one that's only leading to 5% of them.

How to Reduce Auction Overlap and Avoid Audience Saturation

Follow these best practices to set your ads up to win more auctions, get seen by more people, and maximize your results.

To avoid or reduce audience overlap, first try refining your audience targeting at the Ad Set level. If it keeps happening, try consolidating some of your overlapping Ad Sets. If some are targeting very similar audiences, you could potentially see better results by consolidating them into one bigger Ad Set with a larger budget.

Relevance is an estimate of how interested we think a person in your target audience will be in your ad compared to others targeting the same audience. Negative feedback means people who are seeing your ad are saying they don't want to see it. Since we want to show people ads that resonate with them, an ad with a higher relevance score and lower amounts of negative feedback should reach more people in your target audience for less money.

If an ad's relevance score is low or its negative feedback is high, first try adjusting your targeting.

The Facebook auctions are dynamic marketplaces. To sustain good performance and consistent delivery, you may need to continuously tweak your ad sets. However, also keep in mind that it takes Facebook some time to register your changes and adjust how they're showing your ads. Because of this, they discourage making too many changes too quickly. If you make a change, give it time to take effect so you can see how it changes ad performance, then make more changes if necessary.

As you increase your budget, you have to win more auctions to spend it. There are only so many auctions with the same cost per result that you've been getting. Because of this, as your budget increases, you increasingly have to go for higher cost results. Therefore, Facebook will enter you into auctions with more expensive results. This obviously raises your average cost per result. Keep in mind Facebook is still trying to get you the cheapest results available, given your budget and market dynamics.

Changes to an ad set require Facebook's system to re-learn how to best deliver it, which can lead to temporary suboptimal delivery. This could also be a factor in increased costs when increasing your budget. However, that learning should take place within 24 hours, so if the cost is still higher after 24 hours, the increase is likely not related to this phenomenon.

We love the new Delivery Insights dashboard as it shines a light on the Facebook auction never before seen. However, we wish this tool was available on all Ad Sets so advertisers can better understand how much audience overlap there is across all their Ad Sets.

Looking For a Better Way to Examine Your Facebook Data?

With AdStage Report it’s easy to stay on top of results and share them with your team.
Cut hours of manual reporting time and produce the perfect, branded report.