This week on The PPC Show, Paul and JD break down the top news and trends in ad tech and digital marketing.

Tune in to the #PPCShow to get caught up on the top Ad Tech headlines!

Apple Senior VP Craig Federighi said “intelligent tracking prevention” uses machine learning to keep trackers, namely ad trackers and third-party data trackers, from following users as they browse from site to site. That browsing information data is routinely used for retargeting, interest and other behavioral ad targeting. Ads themselves aren’t blocked, just the user’s previous browsing data. The move is “not about blocking ads — the web behaves as it always did, but your privacy is protected,” said Federighi.

See also: Apple and Google are cracking down on obnoxious online ads. And they just might change the way the web works in the process.

All publishers in Facebook's ad network can now feature ads within "Related Articles" sections at the bottom of their Instant Articles.

On Thursday, Facebook announced that all Instant Articles publishers can feature ads within the “Related Articles” section appearing below their actual articles. Facebook had started to test these ads in March 2017 and had seen that they generate an “incremental increase” in the amount of money publishers can make per thousand page views, according to a company blog post published on Thursday.

We are launching three new templates that make it easier to create a Canvas for these business objectives. Templates are pre-built and ready to go. Just add your own content. You can crop images to fit the template so it's easy to reuse assets you already have.

You can now attach a Canvas fullscreen experience that opens up instantly when people click on a collection. Alternatively, you can create a Canvas from scratch and attach it to the collection, if you want to create a customized experience.

Another SnapChat rip off. They’re just like Snapchat’s Snap Ads With Attachments, except Instagram’s version cannot load an in-app advertorial or native extended video when people swipe up.

The main difference with the direct-response version of Story ads, aside from being priced on a per-click basis, is that the ads can not only catch people’s attention but also directly convert them into customers. The ads feature a message on the bottom prompting people to swipe up to visit a website or open their device’s app store to install an app.

Instagram is providing new direct response ad options within Stories, helping expand the platform's business use case. As reported by Marketing Land, the new option is being made available through Facebook’s self-serve ad-buying tools, Ads Manager and Power Editor, as well as through Facebook’s advertising API.

The direct-response ads aren’t much different from the version that Instagram added to Stories in January. Brands can feature a single vertical photo or a vertical video that’s up to 15 seconds long as their ad, and they can target the ads using Facebook’s standard ad-targeting options, like people’s age, gender, location, interests and purchase history.

From Andy Taylor at Merkle Associate Director of Research

In April, Google quietly removed the ability for advertisers to add new Places of Interest location targets for airports and universities, and in May completely eliminated these targets from AdWords. We’ve confirmed this timeline with representatives from Google, which did not issue a public announcement of the change, despite the location target type help page continuing to include information or airport and university targeting.

It’s interesting that Google would bother eliminating a targeting option, particularly without any public announcement to advertisers. However, it’s not a big deal for most advertisers as these geographic targets were rarely used for the most part, a fact that likely played into Google’s decision to do away with them quietly.

Snapchat rolled out the ability for businesses “to create on-demand geofilters from scratch” online. Adweek reports that Snapchat’s new web tool contains preset categories for special events such as birthdays, weddings, and more. Users can access templates and modify their text, colors, and graphics to suit their needs. Pricing varies depending on the length of time that the geofilters will be available, as well as the size of the geofence (minimum of 20,000 square feet).

Stats of the Week

How are businesses carrying out marketing attribution?

But research by Adroll shows that shockingly almost half of agencies and close to half of clients are using spreadsheets and manual attribution processes, rather than using vendor technology or an independent third party. 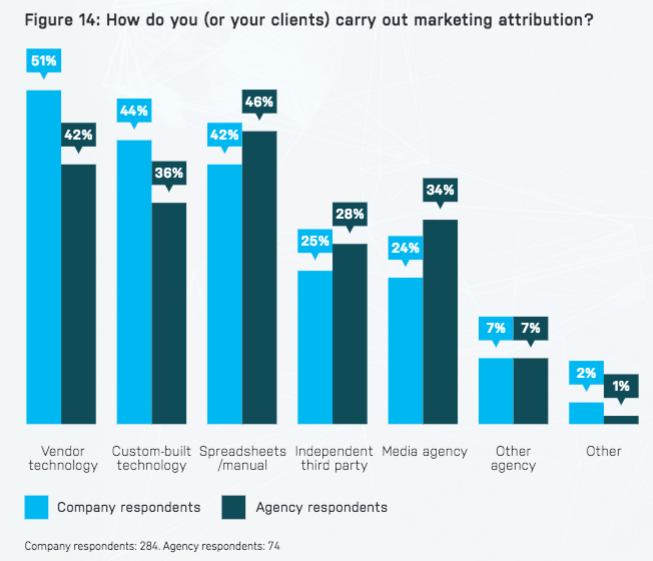 This report also shows where marketers are using tech for attribution, it's overwhelmingly vendor technology. This tech can be useful, but as recent analytics errors at Facebook have shown, it can result in over-reporting. Third party attribution tools can provide a less biased picture, although these can't be used for certain platforms which are 'walled gardens' where the vendor controls the metrics and analysis

The majority of Fortune 500 CEOs don’t have a presence on any of 6 major social networks analyzed, according to the latest study [download page] of CEOs’ social behavior from Domo and CEO.com. In fact, most of those who do maintain a presence do so on only a single network, amounting to one-quarter of the total sample tracked last year.