Facebook recently released an update to its Lookalike Audiences that makes them even more powerful and easier to use for advertisers who wish to reach a global audience. If you’re not already familiar with Lookalike Audiences, it’s a Facebook targeting option that shows ads to people who are similar to those already connected to the brand.

Using a Custom Audience list of customers, marketers can select Lookalike Audiences, which will show ads to people who “look like” their existing customer base. This is generally used as an audience expansion technique to reach more potential customers.

In the past, Lookalike Audiences had to be executed for one country at a time. For example, let’s say you wanted to target an English language ad to United States, United Kingdom, Canada, and Australia, the audiences would have be created separately and combined in the targeting.

It was fairly messy with so many audiences and obviously took a lot longer to create and manage. Many times, advertisers would limit the number of countries they wanted to target with Lookalike Audiences to avoid the chaos. 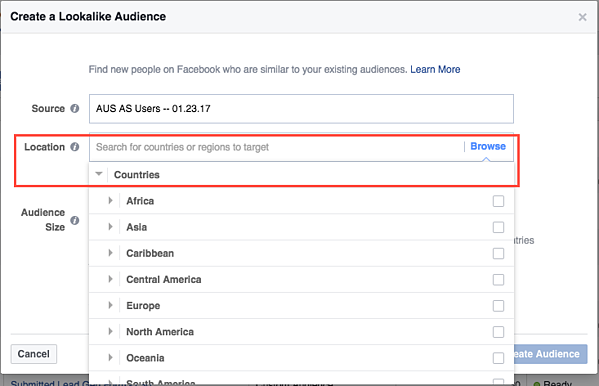 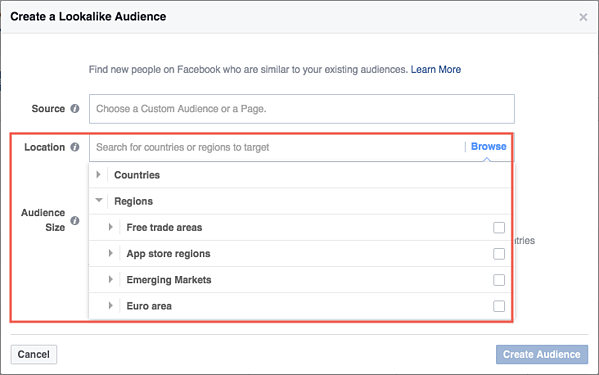 Free trade areas groups countries are classified into the following:

By hovering your mouse over any of the groups you can see which countries are within them. 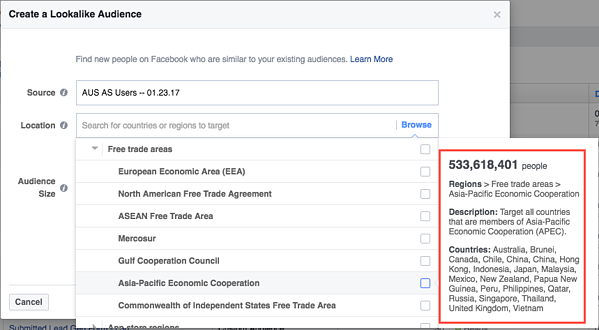 Emerging markets could be a good source for cheaper clicks, but keep in mind that this audience may not always have the funds or internet connectivity to be reliable customers.

Targeting the Euro area, which includes anyone who uses the Euro as their primary currency, could be useful for businesses that wish to reach the entire European Union.

This may be useful for top of the funnel or brand awareness campaigns, to expose more people to your brand, but may not result in immediate conversions. For this reason, we recommend promoting an educational blog post or video that will drive more engagements, rather than conversions.

If you’re a performance advertiser looking for conversions, we don’t recommend using Lookalike Audiences as your primary targeting option, but rather, you can build a Custom Audience with people who’ve previously engaged with your website or video, and run a retargeting campaign that promotes opt-ins or products.

In the past, Facebook only allowed you to create a Custom Audience from an email or phone number. However, now you can add a number of fields that will help you be more precise with your Custom Audience targeting and match rate with Lookalike Audiences. For performance advertisers and specifically B2B advertisers, the match rates could be higher as some consumers use their personal email address with their Facebook account rather than their business email address, which is the one you likely have on file.

To upload a data file for your Custom Audience, include as many fields as possible in your csv or txt file.

For more details on preparing your data file for the best match rate on Custom Audiences, visit Facebook’s documentation here. Some of our clients have seen as much as a 60% increase in their match rates for their Custom Audiences.

What do you think of the new Lookalike Audiences? Any results you’re seeing as part of this release? Share them with us in the comments section below!