Data Visualization: When and How to Use Graphics for PPC Reporting

Technology, an increasing demand to squeeze the most out of every minute, and the desire to objectively present information are driving our world to become ever more visual. Whether in news media, on social, or in daily business reports, there exists a need for detailed information to be presented and understood quickly.

You probably deal with mounds of ad data every week, but it’s often hard to sort through what really matters, and when it does, how to effectively tell a story with the numbers. No doubt you’ve come across a graphic before that either didn’t make any sense or did little to present information in a way that illustrated a point.

Visualizing ad data isn’t always necessary, but when used correctly at the right time, can be crucial in getting your point across.

Reasons To Use Data Visuals In PPC Reports

Popping a graphic or two into a report can give it a professional look and save space where’d you otherwise need to use a bunch of text, but before you go drawing up a complicated line graph, make sure there’s a valid reason for the graphic. A few of the more obvious include:

You don’t want to spend time on a meaningless graph, but you also don’t want to miss the opportunity to include valuable information that tells a powerful story. Make sure there’s a compelling reason to visualize a chunk of data and it’ll be a natural part of your report.

When To Use Certain Visuals

Pie charts, line graphs, bar graphs, Venn diagrams. Just hearing that list can bring back middle school memories of math class. Sometimes it’s obvious which chart type is most appropriate, but other times – not so much. Figure out what the goal of your chart is, and you can easily discern between which to use.

If you have many key players referring to the data, and each will be interested in his or her own piece, a table or metric is a good call. In this example from the NY Times, a table is used to show how common certain birthdays are, based on how many babies were born on that date between 1973 and 1999.

While it’s interesting to see how your birthday might compare to another one, you’re likely only looking for information that pertains to you and then moving on. One thing to note is that unlike other data visualization options, a table won’t bring your audience to an immediate conclusion, rather it will simply organize and present the information for reference. 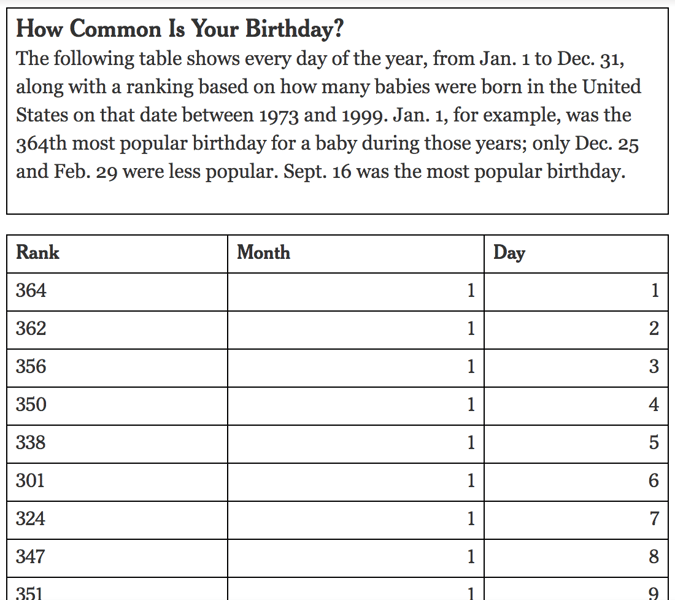 The very structure of a line graph is set up for data to be shown over time. In this interactive chart from USA Today, four bar charts show why Apple recently cut the price of the iPad – starting with declining market share, then slipping quarterly sales, declining tablet shipments, and finally a comparison to other tablet manufacturers. The first three graphs are shown on a year over year scale, helping highlight the iPad’s rise, plateau, and decline – a strong indication it’s time for Apple to make decisions to reverse the drop in sales.

Depending on what you’re trying to present, a traditional chart might not do the job. If that’s the case, you have to get creative. Time does a great job categorizing and then visualizing the daily routines of famous creative people in this interactive chart. 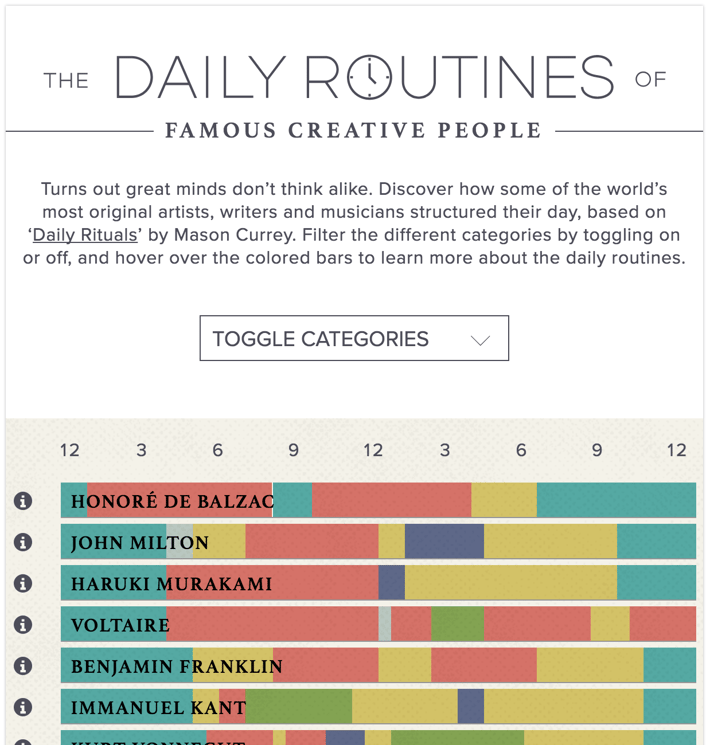 How To Use Data Visualizations

No matter what type of data visualization you’re using, you must set the narrative. On a basic level, all graphics should be correctly titled, and all data clearly labeled. Providing the right context will help avoid misinterpretation of objective data.

AdStage’s Report product takes care of all of that for you, and helps you generate better PPC reports and tie campaigns to revenue with closed-loop reporting in minutes. As we highlighted in a previous post, the cross-channel dashboards in Report offer customizable widgets for advertisers to select the data set and the visual components of the dashboard, such as tables, metrics, graphs, and charts.