Be sure to checkout the latest Q1 2018 Facebook Ads Report for the latest trends.

Facebook’s ad impressions are flat while ad spend is moving up. This tells us advertisers are paying more to enter the auction while getting the same number of impressions.

Based on our data, we saw CPMs increase by 171% during the first half of 2017. This shows how competitive the auction is and illustrates why Facebook is having ad load issues.

The CPCs of Facebook Ads went from $0.42 to $0.99 during the first six months of 2017. That’s a huge jump, especially when thinking about the role of Facebook in the customer journey.

Advertisers are getting consistent CTRs month-over-month, but it’s costing more to get the same result due to higher CPMs and CTRs.

Our ad spend data includes all ads run on Facebook, Instagram, and Audience Network. There are a number of possible explanations for the increase in CPMs and CPCs.

Keep in mind that Facebook’s five million advertisers are only 8% of the 65 million businesses active on the network. Therefore, we don’t foresee a slowdown in advertisers' growth over the next 12 months.

Hanapin Marketing conducted a paid social survey asking marketers where they plan to increase and decrease budgets in 2017. They reported that 73% of marketers are investing the majority of their social spend on Facebook and 71% plan on increasing their Facebook ad spend within the next year. 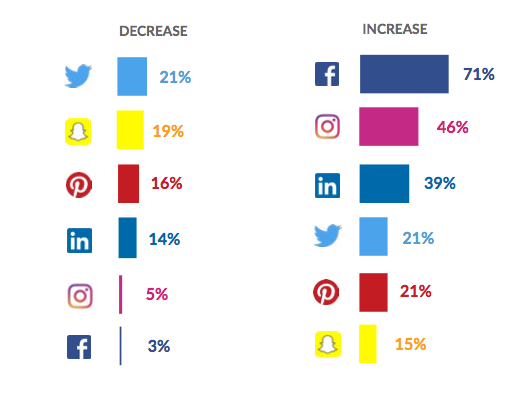 Our Facebook data confirms that advertisers are indeed increasing their Facebook budgets as overall ad spend more than doubled since January 2017 (122% increase).

“We anticipate ad load on Facebook will continue to grow modestly over the next 12 months and then will be a less significant factor driving revenue growth after mid-2017.”

The company's Q2 2017 results showed its reaching max ad load with only a 19% paid ad impression growth compared to Q1'17's 32% and Q4'16's 49% growth. However, Facebook’s revenue will continue to increase as surging ad prices, user growth, and Instagram are enough to pick up the slack.

Eric Jhonsa of The Street reported:

“Slower ad supply growth is naturally boosting prices. But given that supply is still growing (albeit at a slower rate), it's also clear that strong ad ROIs -- made possible by Facebook's powerful and steadily improving targeting abilities -- are motivating marketers to pay more for ad impressions and clicks. A growing mix of video ad sales might also be helping, given that video ads tend to carry relatively high prices.”

Based on the data, here are our main insights and takeaways:

Our mission at AdStage is to connect paid marketers quickly and easily to the data they need to understand holistic campaign performance and take action at scale. Learn more about our Facebook Ads reporting solution, and get our latest Q1 2018 benchmark report!