Facebook Audience Network (FAN), which reported a $1 billion run rate earlier this year, is a great option for marketers looking to scale their ad campaigns. FAN lets you run ads on third-party websites and apps while taking advantage of all the things that are great about Facebook native in-feed ads: rich targeting data, measurement, and user-friendly interface.

I know you’re probably thinking: my conversions and brand safety would really improve if I could just place more ads alongside third-party content that I can’t control. Well, with a little bit of tinkering in Ads Manager and a trusted list of exclusions, you can increase reach at a lower CPM and perhaps, even drive more down-the-funnel metrics. Below, you'll find a complete guide to FAN and our trusted list of exclusions to make Facebook Audience Network work for you.

Facebook launched its Audience Network back in October 2014. This strategic move allowed Facebook to grow its footprint by boosting the volume of ad spend going to off-Facebook websites and mobile apps. Needless to say, it's a way for Facebook to address its growing ad load challenges. FAN lets advertisers extend their Facebook campaigns outside of the social network while using the same ad targeting data.

FAN has grown quickly over the past few years. It’s not just websites and apps now; Facebook is aggressively taking aim at the TV advertising market. Facebook video ads are delivered through apps that run via set-top boxes, such as Apple TV and Roku.

Types of Ads in Audience Network

As of October 2017 (and Facebook has been moving especially fast this year), Facebook Audience Network lets advertisers place ads in the following formats:

Rewarded videos currently support Unity and Cocos2DX game engines. Mobile gamers can choose to watch an ad in exchange for in-app rewards such as coins and power-ups.

Facebook’s SDK is now embedded into nearly every app on the planet. The use of header bidding and a solid inventory that includes Instant Articles makes Facebook a major challenger to traditional programmatic inventory sources and direct ad channels.

Facebook inventory is in high demand. Facebook's CPMs were up 171% in 2017 and showing no sign of a slowdown, especially with the upcoming holiday season. For advertisers looking to scale spend and reach, the Audience Network could be a good option.

A few ways advertisers can take advantage of FAN:

In a nutshell, the Audience Network is Facebook’s version of Google AdSense. Here’s how it works:

Create Ads for Your Campaign Objectives

If you disable automatic placement, Facebook will recommend using Audience Network for the following campaign objectives:

Whether you’re increasing brand awareness measured by views and clicks or driving sales, you need to write Facebook ads for people in the “browse” mode. Like billboard ads, FAN creatives shouldn’t pack too much information. The simpler the message, the more powerful the effect.

Set Up Your First Facebook Audience Campaign for Success

Whenever you create a campaign using the new Ads Manager, Audience Network is selected by default for any of the FAN-enabled ad objectives. 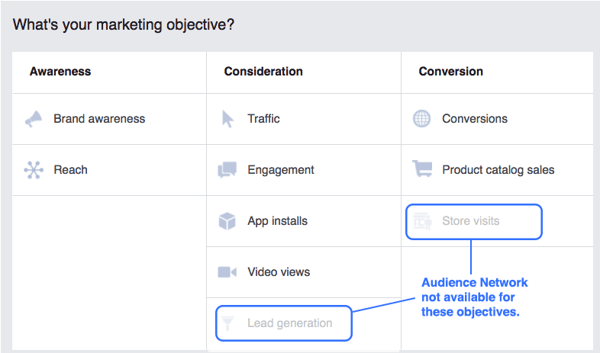 So, unless you manually opt out of running ads on FAN in Settings, your ad will be running both in native Facebook feed and on the partner network. At the same time, you can’t select Audience Network alone. Ads must run either on Facebook or Instagram to run on FAN. 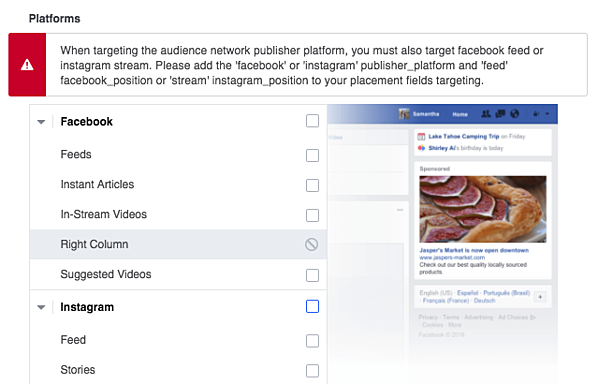 It's possible to drive quality traffic for your direct response campaigns on FAN. Be mindful to review your placement report and not waste your ad budget on fake clicks and hurt brand image in the wrong placements. Facebook Blueprint course recommends leaving the Automatic Placements option selected, but you’ll really be better off by commanding more control. So skip the “recommended” trap and head over to Advanced Settings and Block Lists – these settings are not that “advanced” and will take you like five minutes to set up.

Protect the Brand and Improve Results with Blocklists

To set up a block list for Facebook Audience Network, go to Business Settings in your Facebook Ads Manager and find “Block Lists” under People and Assets. Upload your block lists. Apply your block lists to all or selected ad accounts. When you create a new ad set or ad, you can check if the list has been applied in Advanced Settings =>> Exclude Categories =>> Account Block Lists. 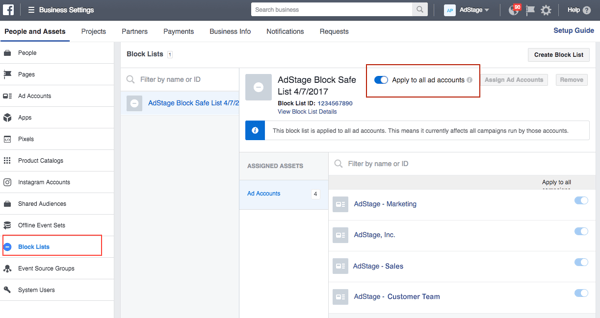 At AdStage, we built our FAN blocklist based on Seer Interactive’s blocklist for Google Display Network. You can copy and export in .csv AdStage’s blocklist for Facebook Audience Network by clicking on the link. The volatile political environment has led many programmatic buying platforms to shun many alt-right news websites, and you can certainly add such sources to your FAN blocklist to ensure the best brand representation and safety. 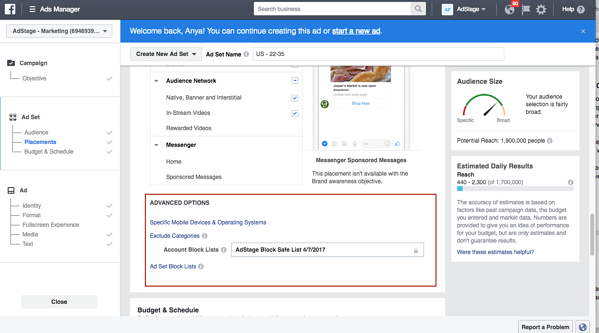 Note: you can add blocklists to your ad account only if you’ve been added as an advertising Admin on that account (if you have advertiser or analyst permissions, you won’t be able to add a blocklist).

You can track your campaign success on Audience Network the same way you would do for in-feed ads via Ads Manager Reporting (or your preferred PPC reporting tool). 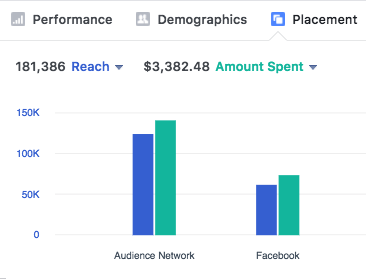