Should You Pay For Social Media?

“Should I pay for social media?”

It’s a question we hear a lot. And while there was a time when social media could successfully be done for free, that time is probably over.

Still, if you’ve absolutely no budget, you can still get some traction from social media. But any company that really wants to make progress will find it easier and more effective to spend a little money.

Here’s why the age of free social media is basically over.

If you’re reading this blog, you almost certainly know that we recently got hit with another major change on Facebook. On January 11th, Mark Zuckerberg announced that the company is “making a major change to how we build Facebook.” He continued:

The first changes you'll see will be in News Feed, where you can expect to see more from your friends, family and groups.

As we roll this out, you'll see less public content like posts from businesses, brands, and media. And the public content you see more will be held to the same standard -- it should encourage meaningful interactions between people.

That means (among other things) that Facebook’s already slim organic reach will fall to basically zero. Even if you have thousands of followers, probably only a dozen or so of them will see your posts on a regular basis.

Organic reach has been falling rapidly over the last few years, but as the Wall Street Journal said of this most recent announcement, this change will basically be “the nail in the coffin” of organic reach. Even before this announcement, organic reach for most brands was below 1%.

So if you want people to see your content on Facebook now, you’re basically going to have to pay for it.

2. Facebook’s referral traffic has dropped in the last year.

Facebook is still giving Google an excellent run for its money when it comes to referral traffic. But Facebook also tends to prefer content that keeps people on their site. 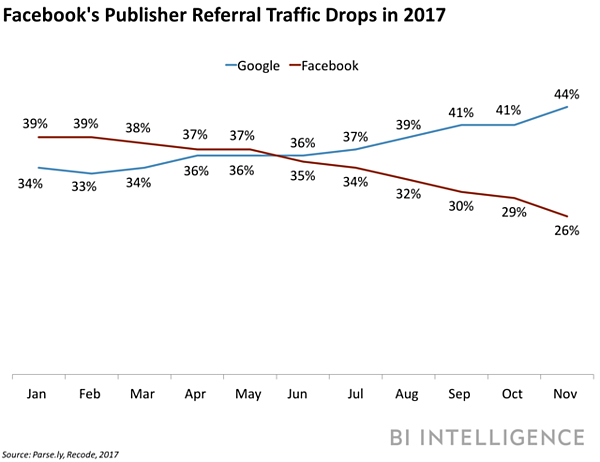 And so if you want traffic to your website, and you want that traffic to be from Facebook, you may need to pay for it. Or you’re going to have to work harder and smarter than ever before (so you’ll pay in time and effort rather than money).

3. As other social media sites get more crowded, they too will require some spending if you want to get your content seen.

There’s more to social media than Facebook, of course (though it is the 800-pound gorilla of social media). LinkedIn is important – it’s essential for B2B marketers. And Instagram is developing rapidly and is already a powerhouse. And then there’s Twitter, YouTube, and Pinterest, all of which can work beautifully for specialized audiences.

But as these platforms become more competitive, they will also require some spending if you want to get more of your content seen. And in terms of referral traffic, they’re still dwarfed by Facebook. 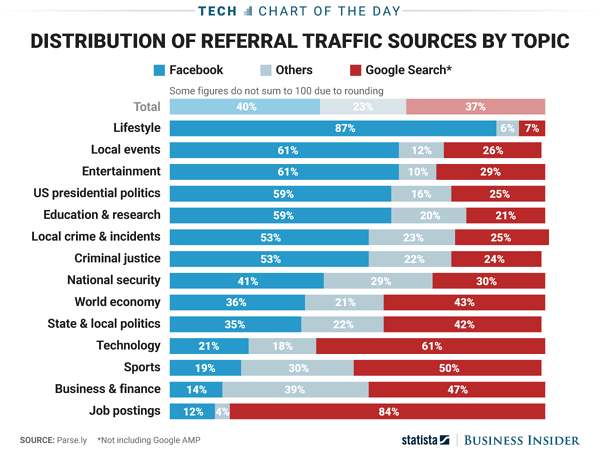 Basically, as ad inventory gets tighter and costs rise on Facebook (CPMs were up 171% just last year!), it only makes sense that advertisers will begin testing other platforms.

4. Social media is complex enough that even if you can’t afford advertising, you should invest in a scheduling and analytics tool.

It is true that almost every social media platform has basic scheduling functionality. And they all offer analytics reports.

But managing these on a platform-by-platform basis is difficult. If your time is worth more than a few dollars per hour to you, it’s smart to spend some budget on a good scheduling and marketing analytics tool (or tools). Social media is just too complex now to be doing it 100% manually.

How to Pay Less for Social Media

So does all that mean that you can’t do social media without spending money? Well, no. But it will be far easier and you’ll get better results if you can afford to spend some money.

The operative word there is “some”. You don’t necessarily need a huge budget. Especially if you do this to keep costs down:

Early adopters can do well on social media. Very well. Right now, there’s a major opportunity with Facebook Messenger for marketers who are willing to test. Our Ultimate Guide to Facebook Messenger Ads can show you how to get started with the advertising part. But you can do Messenger marketing without advertising, too. 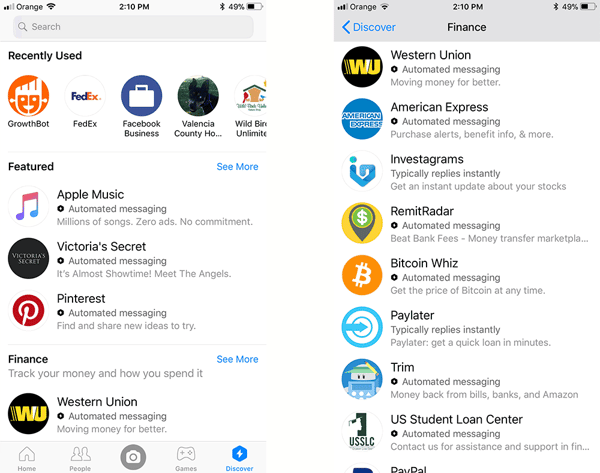 Hundreds of thousands of companies, bots and people are on Messenger. If you’re not there yet, it’s time to start experimenting.

There are still plenty examples of “viral” campaigns on social media. And even if your posts don’t quite achieve full viral glory, usually there’s a post or two every week or so that just does better than average. Every marketer gets lucky once in a while.

We suggest you boost those posts.

This means you’ll sacrifice some control, of course. But social media isn’t straight-up old-style advertising. We can’t just broadcast any old message (unless you want to blow your budget). But we can “ride the wave” of popular content.

So consider investing what advertising budget you do have in posts that just naturally work. Work with the algorithms, rather than trying to force messages and posts that people just don’t care about.

3. Publish more of what works.

If your budget is small, you may have to invest more time and creativity into your posts than your more affluent competitors do. You’ll pay in time and effort rather than paying in dollars.

As Michelle Morgan, Director of Client Services at Clix Marketing says in our blog post, “Top 2018 Facebook Ads Predictions from the Experts” :

Whether it’s creating a new conversion type for a lead generation company, being more appealing with your ad copy doing a better job of not over-saturating your audience, or creating a retargeting funnel, there are many ways to get more creative with your advertising; and 2018 is the year you’ll have to flex those muscles to get the returns you need.

So step back from pushing content that exclusively serves your brand. Try to stoke some fun and get more responses from your fans. Like the pet retailer Chewy has done here with their doggy yoga post: 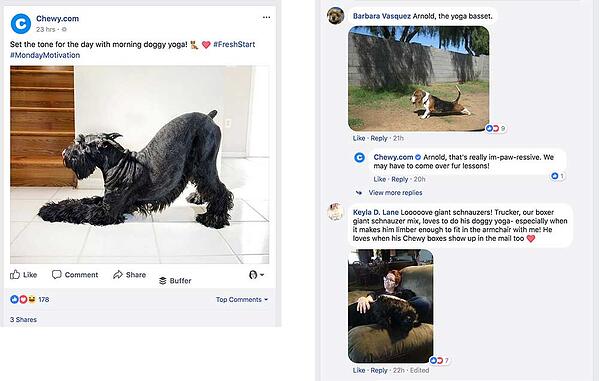 4. Think outside the advertising box

Still not sure you can scare up enough budget to employ even those low-budget tactics? Don’t worry – and don’t abandon social. There are important things you can still do (and should do) on social media that don’t require a dime of advertising.

Consumers expect a response to any complaint or request made on social media. And usually, they expect those responses fast.

Customer service is typically done through Facebook or Twitter. But because these messages are direct, you don’t have to spend any money to communicate with people. And if you can respond to social media customer service messages fast (Check our Nest’s Twitter page for inspiration), you’ll keep existing customers and show prospective customers just how good you are. 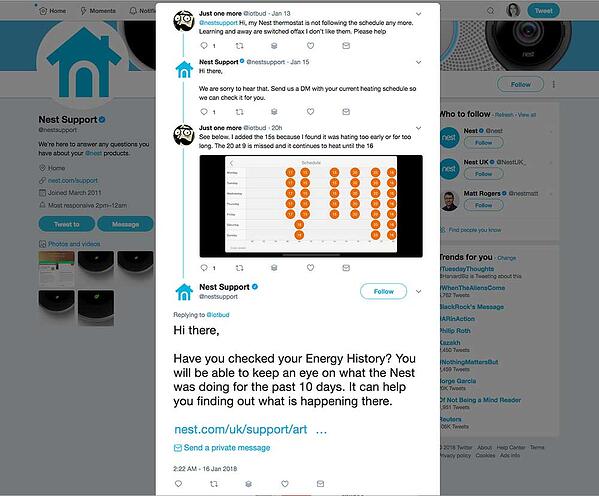 Most consumers expect a quick reply to customer service issues on Twitter.

Hiring isn’t the first thing we think of when we think about social media, but your social media feeds can definitely help with it. 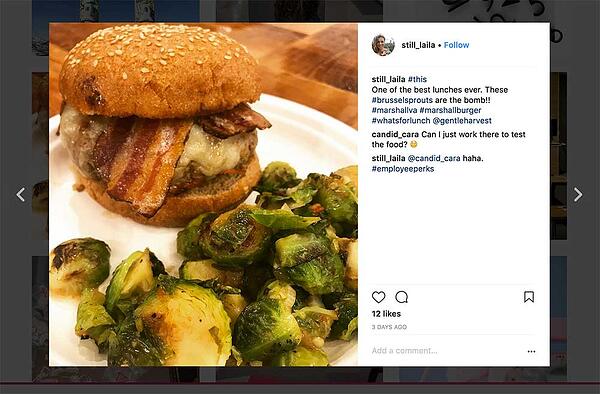 You may not get a lot of engagement for these types of shares, but it only takes a handful of prospective employees to see them to make these posts worthwhile. Source: Instagram

5. Use your social media posts to supplement your email newsletters or your blog.

Do you stress about what to put in your email newsletters? Stress no more: Social can save your bacon. Just use some of your social media posts to flesh out the empty spaces in your emails.

DKNG Studios has plenty of content for their email newsletters thanks to their social media posts. Source: ReallyGoodEmails

That said, you can still cut your costs, both in terms of money and in terms of time and effort. Just get smart about reusing content, and use what advertising budget you do have to boost what’s already working.

Or start to pay more attention to your social media reports. With a good analytics tool, you’ll be able to see what works for your audience much more clearly. And that means you can serve up content that’s more successful – whether you decide to boost it with advertising or not.