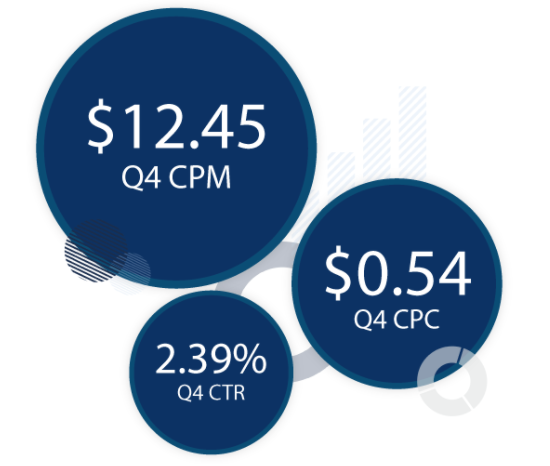 Be sure to view the Q1 2018 Paid Search and Paid Social ads Benchmark Report for the latest trends.

Facebook advertisers saw a positive CTR increase of 24% from 1.92% in Q3 to 2.39% in Q4. The 2017 trend shows that Facebook CTR increased in Q4, recovering from mid-year lower average CTRs. Year over year CTRs are relatively flat at -2%. 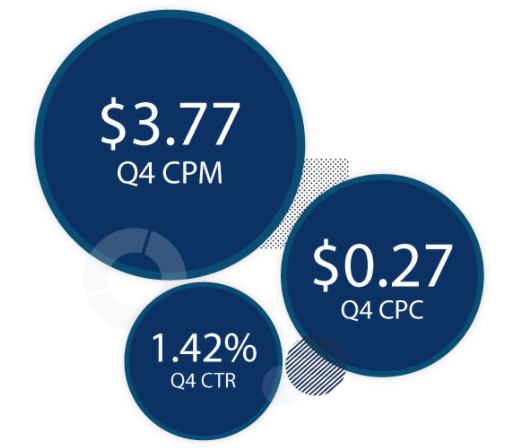 There were three factors that are worth calling out as they relate to Facebook ad results. According to Facebook's Q4 earning call, the network made algorithm tweaks resulting in a 5% drop in the total amount of time users spent on the social network.

Lastly, the number of Facebook advertisers grew to over six million at the end September 2017. That's over 1 million new advertisers from March 2017. Based on that growth plus the holiday season, we can surmise that Facebook added more advertisers in Q4.

Take these three factors together and it's easy to see why the ads auction is so competitive and further illustrates Facebook's ad load capacity is maxed out. That said, the results must be positive as budgets on the social network saw a 26% increase in Q4 compared to Q3 according to AdStage data.

Looking forward into 2018, Facebook will play a bigger role in paid marketer’s mobile strategy. I predict Facebook marketers will turn to Instagram ads to drive conversions, experiment with Messenger ads to start conversations, and turn to offline conversions to measure business impact. Check out expert Facebook predictions for 2018.

Get the Q1 2018 Paid Search and Paid Social ads Benchmark Report for the latest trends across all major ad networks.