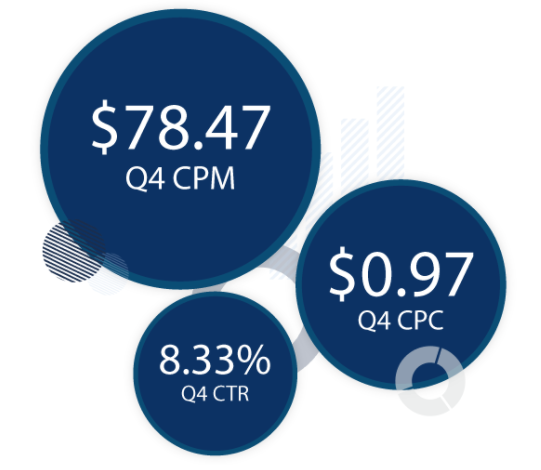 *Note: these benchmarks do not include ads run on Google Display Network or Youtube.
Be sure to view the Q4 Paid Search and Paid Social ads Benchmark Report for the latest trends.

Across AdStage’s customer base, Google AdWords search spending increased by 146% year over year in Q4 2017 and by 9% QoQ. In addition, AdWords captured 91% of paid search budgets while Bing Ads earned the remaining 9% in Q4. This expansion will push Google’s share of the US digital ad market to 42.2%, according to eMarketer.

That said, Google AdWords and Facebook ad budgets are truly a duopoly gobbling up more than 60% of US digital ad investment. Looking into 2018, these trends aren't slowing down as Google owns the #1 browser, search engine, email platform, and video network. As more performance marketers shift their focus and budgets into full lifecycle marketing rather than bottom of the funnel marketing, AdWords will continue to receive a lion's share of the digital ad budgets.