Forrester contends that social media advertising budgets will grow to $40 billion by 2021. Which channels will drive the most growth? As consumers switch between screens and apps more often than ever, we'll see a battle for the scarcest marketing resource -- the audience's attention. To build an effective cross-network advertising strategy, marketers need to understand the dynamics of social media use across different channels. We looked at the recent Pew Research study on the social media use in 2018  to uncover the key demographic trends.

Pew’s findings feature data for the five major networks: YouTube, Facebook, Twitter, Snapchat, and Instagram, plus the Facebook-owned messenger WhatsApp. The five stats below show that most users are scattered across 3+ social platforms, but some networks are better than others for targeting particular audience segments.

Pinterest might be the best social media platform for retail marketers to reach female audiences. 41% of the surveyed women say they use the site -- compared with 16% of men.

With Pinterest’s Shopping Ads program now out of beta, more advertisers can now scale e-commerce campaigns on the platform. Pinterest automatically pulls products from the catalog and leverages its visual search technology to help people find the items they need. Preliminary data shows that such ads are effective: Pinterest reported a 25% lift in cost per order for IKEA Canada and a whopping 76% higher return on ad spend for Lowe’s.

Younger audiences favor more visual content platforms, such as Snapchat and Instagram. Both platforms allow marketers to tap into the targeted following of influencers -- or micro-influencers -- through branded content.

Although advertisers are a little slow to adopt Snapchat, larger brands find it particularly effective to combine mobile campaigns with offline. For example, at a Coachella music festival, a single Snapchat story was able to reach 40 million people. 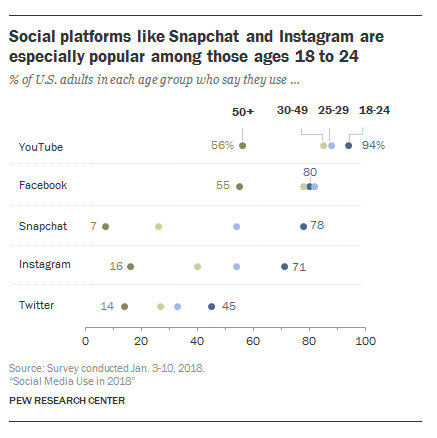 3. The typical American uses three of the eight major platforms

Just one network is no longer enough for organic and paid marketing. According to the report, Americans are active and engaged on multiple platforms.

Facebook-owned messaging service WhatsApp is very popular in Latin America. It’s also the number one messenger for Hispanics in the U.S. (49% compared to 14% for whites and 21% for blacks).

While WhatsApp doesn’t allow you to put ads into the app (and has always said it has no plans in doing so), Facebook lets advertisers create a link between the two platforms. Businesses can include a CTA button in their Facebook ads so that people can call or message right when they click on the ad.

According to the recent AdExchanger article, advertisers haven’t changed their spending patterns after the Cambridge Analytica scandal. “As long as ads continue to perform on Facebook, the scandals won’t lead advertisers to pull back their spend,” an analyst interviewed for the article said.

The stats above are for all social media, not just Facebook. But -- considering that Facebook as a platform is incredibly sticky (so much that 74% of Facebook users visit the site daily), the chances of people leaving the platform en masse are pretty low.

So, considering the audience size (about two-thirds of U.S. adults (68%) are Facebook users), granular targeting, and low chances of the critical mass deleting the app, Facebook will likely remain the key channel for social media advertising. 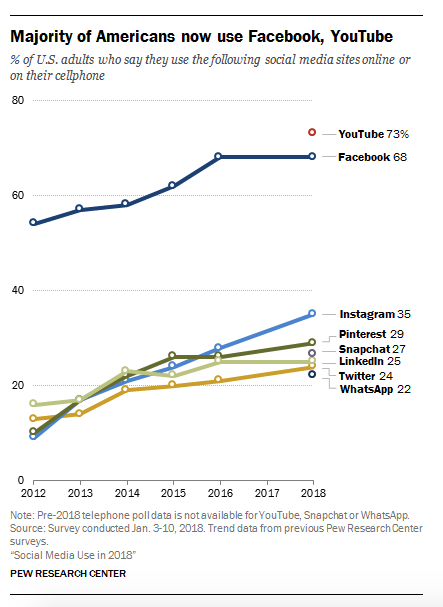 For advertising to be effective, it has to be relevant -- and broad demographic data is just a starting point. These stats provide a simplified framework for where different demographics spend time on social media in 2018.

As you plan your targeting strategy, remember that a narrow focus can lead to greater results -- especially if your goal is direct response. With tools like Facebook Analytics and your website analytics with advanced LinkedIn event tracking, you can refine your targeting beyond demographics.