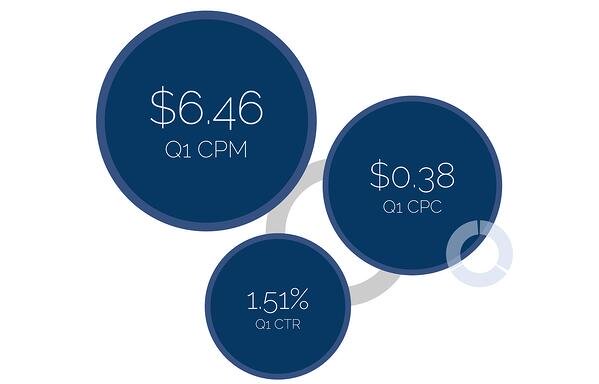 Our data analysis shows that median CTRs on Twitter ads increased by 72% Y/Y, although it’s slightly down from a high in Q4. Among the marketers we studied, median CTR dropped 8.9% Q/Q, ending the quarter at 1.51%.

The data we analyzed from marketers on the AdStage Platform is a snapshot of the overall paid performance data. While you may experience similar performance metrics as our data show, it’s important to understand the overall trends and changes that can affect your unique campaigns.

Based on the data we observed, here are our main takeaways:

Twitter set high expectations among advertisers in Q4, and has continued to deliver confidence that ads produce results on the platform. People are spending more time on Twitter as a result of a focus on video and an algorithm change that surfaces relevant content first, according to Richard Greenfield, an analyst at BTIG. This trend is a welcome change of pace from past performance.

As US user growth flattens, watch for user growth outside the US, providing new audiences for advertisers. Twitter has continued to increase its Japanese user base, up over 12% Y/Y going into 2018, and is expected to continue its push into new markets. “We do believe a renaissance of growth and new engagement is starting to benefit Twitter,” Daniel Ives, head of technology research at GBH, stated in a recent CNBC article.

It’s well worth the effort and budget to continue advertising on Twitter, given its new push into video and expanded reach into new markets.