On Halloween, people get into the spooky spirit by watching horror films, carving pumpkins, and organizing their costumes. But us digital marketers are perpetually haunted by a different type of fear. One that lurks year round. The shutting down of a platform we’ve spent countless hours on, mastering the ins and outs of the advertising tools, and creative requirements, and audience profiles, and aghhhhhhhh!

Most recently, we saw Google+ go the way of Frankenstein’s monster (which was destiny perhaps, since the platform often felt taped together with mismatched pieces). Fans and haters, of course, took to Twitter to share their opinions on the matter, and voices varied:

Some were so upset, their weekends were ruined:

Others, like us, sent it straight to the graveyard to rest in peace among all the other deceased platforms: 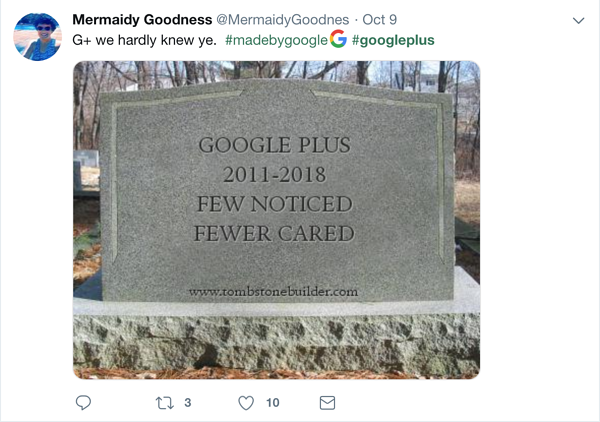 But let’s not beat up on Google too much. As a leading innovator, you’re bound to have some experiments that go awry (Google Reader, Google Buzz, Google Wave, Google Labs … we’ll stop there).

In the spirit of Halloween, here are a few more 6-feet-under platforms whose histories and ultimate demise make for some of the scariest digital marketing ghost stories.

Perhaps an ominous omen to Google’s most recent sunset, Orkut was launched by Google in 2004 after a failed attempt to buy Friendster (oh yes, we’ll go there a little later in this post). Orkut looked and functioned pretty much the same as every other social media platform at that time — you could add people, share content, like posts, etc. Orkut actually caught on for a while, boasting 300 million users around the world (at least according to this marketing post published by the founder’s newest company). India and Brazil loved the social network, but it was meh just about everywhere else. When Google shut down Orkut at the end of September in 2014, the company cited a desire to spend more time on YouTube and Google+ as the reason. Google+ did you say?

When Ping was unveiled at a September 2010 Apple event, Steve Jobs described it as  "sort of like Facebook and Twitter meet iTunes," but "Ping is not Facebook" and "it is not Twitter," instead describing it as "something else ... all about music." Hm, k, what? The platform launched and was flooded with spam and fake accounts, which certainly didn’t help lure in already reluctant music lovers (who tend to be a discerning group to begin with). And then there was some beef with Facebook (always Facebook…). Facebook blocked API access to Ping after the two companies failed to reach an agreement, so Apple removed the feature to connect with your music-loving Facebook friends on Ping. The final nail in the coffin was hammered  September 30, 2012, making this social network just two years old at the time of death.

It doesn’t matter how much time has passed, Friendster must never be forgotten. Forever dead, but forever in our hearts, or case studies, at least.

Though not the first social platform to hit the scene when it debuted in 2002, Friendster was the first to hit over 1 million members (and peaked at 115 million). Like many of the social platforms then and still today, users could share videos, pictures, comments, and chat. Friendster went all in focusing on the media that users were sharing, rather than the connection between the users themselves. Computer scientists at the Swiss Federal Institute of Technology who later studied the rise and demise of Friendster found that a network built on few or weak connections coupled with a terrible redesign in 2009 were the main reasons this pioneering social network found itself in the grave in 2015, even after being rebranded as a social gaming website in 2011. Not to mention the birth of Myspace, and then Facebook.

Xanga was perhaps the original online home for emo kids across the world, at its peak facilitating the sharing of music, books, and other media (but essentially morphing into a LiveJournal-type blogging platform) for 30 million active users. So what happened to Xanga? There was a frenzied attempt in mid-2013 to raise $60k to keep things going, with a monthly subscription model instituted for active users, but by that time people had moved on. Platforms like MySpace (and then Facebook), Wordpress, Blogger, and Tumblr came along and pushed Xanga off a cliff, offering the same features, but bigger and better. But Xanga wasn’t completely killed off. Today it exists as a hosting service, and the company tweeted as recently as August of this year:

And they couldn’t help throwing a little shade at Google+ either:

Who knew that you could get so much done in just 6 seconds? That’s exactly what Vine’s most popular stars (influencers?) showed us when the social media platform launched at the beginning of 2013, after being acquired by Twitter just before that in October of 2012. During Vine’s short existence, we were treated to off-the-cuff hilarity, calculated choreography, stop-motion stories, pranks, magic tricks, and some NSFW content we will not be linking to here. For a quick little trip down memory lane, check out this 25 Best Vines collection.

Competitors like Instagram and Snapchat saw how easy it was to skate in on a video feature, and the two companies started encroaching on Vine’s market share, forcing Twitter to start rolling back support until 2017 when the service became Vine Camera, a slimmed down app that lets users create a 6.5-second looping video that they can save or post directly to Twitter. It seems Vine Camera might also have entered the world of spirits, however. The page https://vine.co/camera currently loads to an “Oops! Couldn’t find it.” I guess there’s no more “Doin’ it for the Vine.”

This Twitter-hating social platform proved what people are and are not willing to pay for. Touting itself as a better Twitter with no ads, it allowed users to blast out messages of up to 256 characters for a subscription fee. Or maybe it wasn’t so much that the co-founders hated Twitter and more that they thought the significant service was "too important to its users to be ad-supported,” and that the social media platform’s current direction was off track. App.net’s co-founders wanted their product to be way more developer-friendly, as a means to encourage the creation of a central place where users could access many products on one connected network. Developers went to town, but the regular users didn’t much care, especially not at the initial $50 fee, not at the reduced $36 subscription, and then not even when it was free.

When the first round of subscription renewals came due in 2014, the lack of love for App.net was apparent. Low on cash, the company could no longer employ anyone to keep building the site and transitioned into a stagnant hosting site (Hm… we’re sensing a pattern here.) App.net limped along in that fashion until it wheezed its final death rattle in March of 2017.

What digital marketers can learn from dead social platforms

There are dozens more examples of failed and forgotten social media platforms, each with their own lessons. But let’s not let these ghost stories keep us up at night, and instead heed the wisdom whispering up from their graves.

App.net didn’t catch on because it was largely the same thing as Twitter, except it wasn’t free. Before you go to the trouble of getting your brand going on a new platform, ask yourself what additional value it would provide to your audience. Does the platform have a new functionality not available anywhere else? Does the new platform allow you to better tell your brand’s story and thus make it easier for your audience to understand your offerings? Don’t jump on to the newest, flash-in-the-pan trend because everyone else is doing it, or you want to be able to say you were the first. Make sure there’s a valid, customer-based reason for your effort.

Respect the nuances of a channel’s audience

When a brand decides to open up a channel on a new platform, often the strategy to build a new audience is to bombard all existing channels with messages to Follow us! Like us! Heart us! Ping us!, etc. And certainly there is some opportunity for that, but someone who loves Twitter, and loves your brand on Twitter may not be so keen to also see you over on New Platform.

Another big no-no: publishing the same message across multiple channels. That would be like a company calling you on your phone, texting you, emailing you, and sending a push notification all at the same time, with the exact same message. NOT cool. New platforms deserve new strategies and new creative made specifically for the platform and audience.

Get creative with how you can build your audience on a new platform. If you really feel the new platform is a gold mine for you, launch a mini-campaign to announce your presence there. Stick a banner on some of your landing pages inviting people to connect with you on the new platform. Mention it in your weekly podcast. Run contests at your convention booth.

Instead of constantly running after the newest thing, keep people happy where they already are. Sure new platforms are all shiny and interesting, but what innovations are happening on your current platforms? Explore opportunities where you’re already established before you dedicate time and money to something that you may get zero value from.

Get inspiration from competitors (and then execute better than them)

Vine got knocked out of the ring after their competitors easily introduced the same video functionality. You should always have an eye on what your competitors are up to (see 10 PPC Tools to Steal Your Competitors’ Best Ads and 5 Ways Lead Gen Marketers Can Use Facebook’s New Feature to Spy on Competition for a few suggestions to get started). Are your enemies, er, competitors, testing a new functionality that seems to be resonating with their audience? Are Twitter polls killing it right now? Are they absolutely owning Instagram Live? Take notes on what’s working for them, and then figure out ways to do it better.

By this time next year, there will undoubtedly be more RIP companies to add to the list. Who’s funeral dirge will ring out next, do you think?