"We sure did, but in a more unconventional way. One of the cornerstones of Aimclear is our obsession with cross-channel marketing, and how to communicate results via data. Our goal with any brand is to get the sales that are available, while building a longer-term branding play. The idea of brand building has always been an elusive metric because it can feel soft.

We have been running pilots for brands with an infusion of video ads on Facebook, but NOT optimizing for site visits, just engagement. We then monitor brand lift via search and direct traffic in exposure cities and control cities in the weeks thereafter. It gives insight into whether those metrics increased to reflect a raise in brand awareness, how effective the creative was, etc." - Susan Wenograd, CMO at Aimclear

Last year video was a huge push for many companies looking to increase engagement and drive brand awareness. With placements on YouTube (which, alone, has over 2 billion monthly users), Instagram, Facebook, and many more networks it's a great strategy to get people interested in what you're all about.

Google saw significant lifts in online awareness (+10.4%), emotional connection (+10%), brand consideration (+8.3%), and favorability (+8.7%) with their YouTube TrueView campaigns (an ad type that you only pay for when a viewer watches at least 30 seconds or until the end of the video, or clicks on your ad).

In Q4 2019 we saw an uptick in the median cost per click for YouTube advertisements, but it remained significantly lower than it was during the same time the previous year. 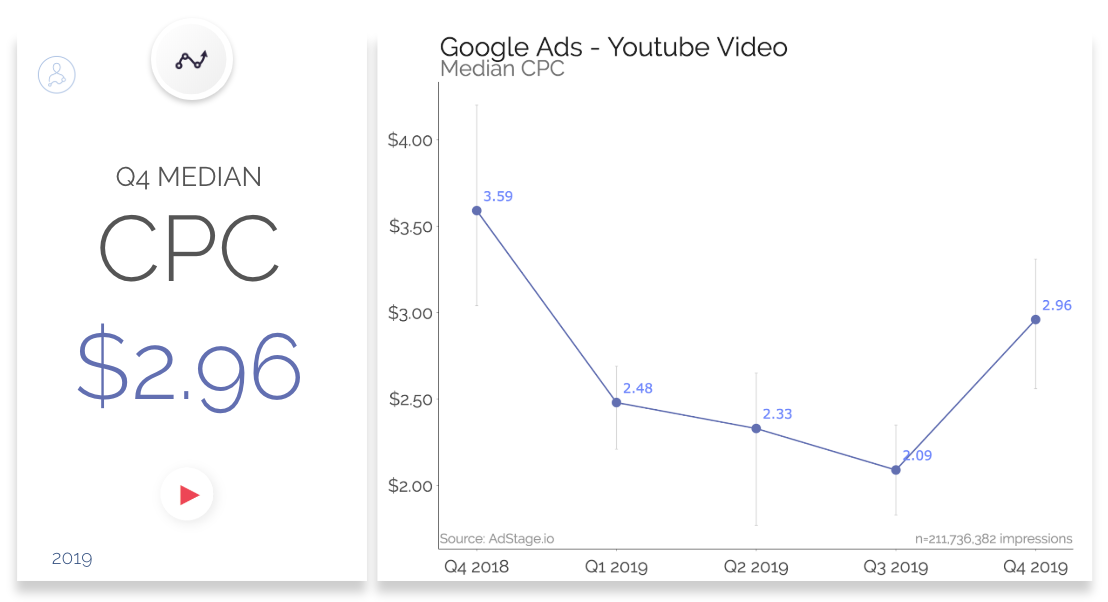 Our Q4 2019 Paid Media Benchmark Report also includes stats on CPM and CTR for YouTube, get the report to see what those were! And be sure to check out the section of insights from the experts.