In the last quarter of the year, Google made some major changes to Display campaigns, and it couldn’t have come at a better time since our calculations found that costs and click-throughs on the network remained stagnant. In Q4 2018, we analyzed over 3.4 billion impressions and over 40 million clicks across Google Ads Search and Google Display Network to calculate median CPC, CPM, and CTR for each advertising channel.

Compare your own numbers to our calculations, and be sure to read the Q4 2018 PPC Benchmark Report for additional ad performance trends. Check out our Benchmark Report page for the latest reports by quarter.

In Q4, we found that median CPC dropped 70 cents from last quarter, ending 2018 at the cheapest it’s been all year, but is up 42 cents from where it was same time last year. 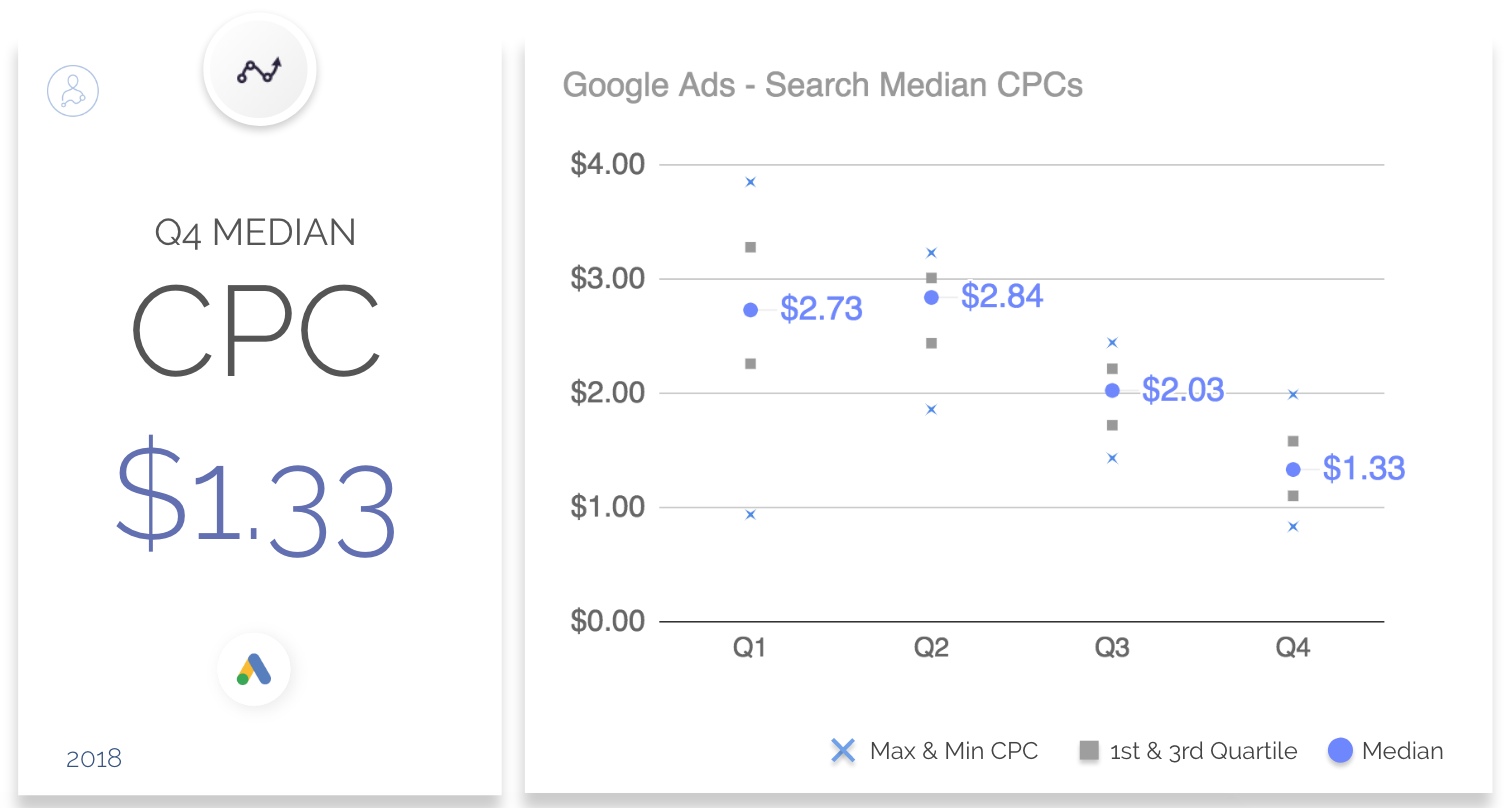 Our calculations showed median CPM dropped $33 since last quarter and remains down from the same time last year when it ended 2017 at $78.69. 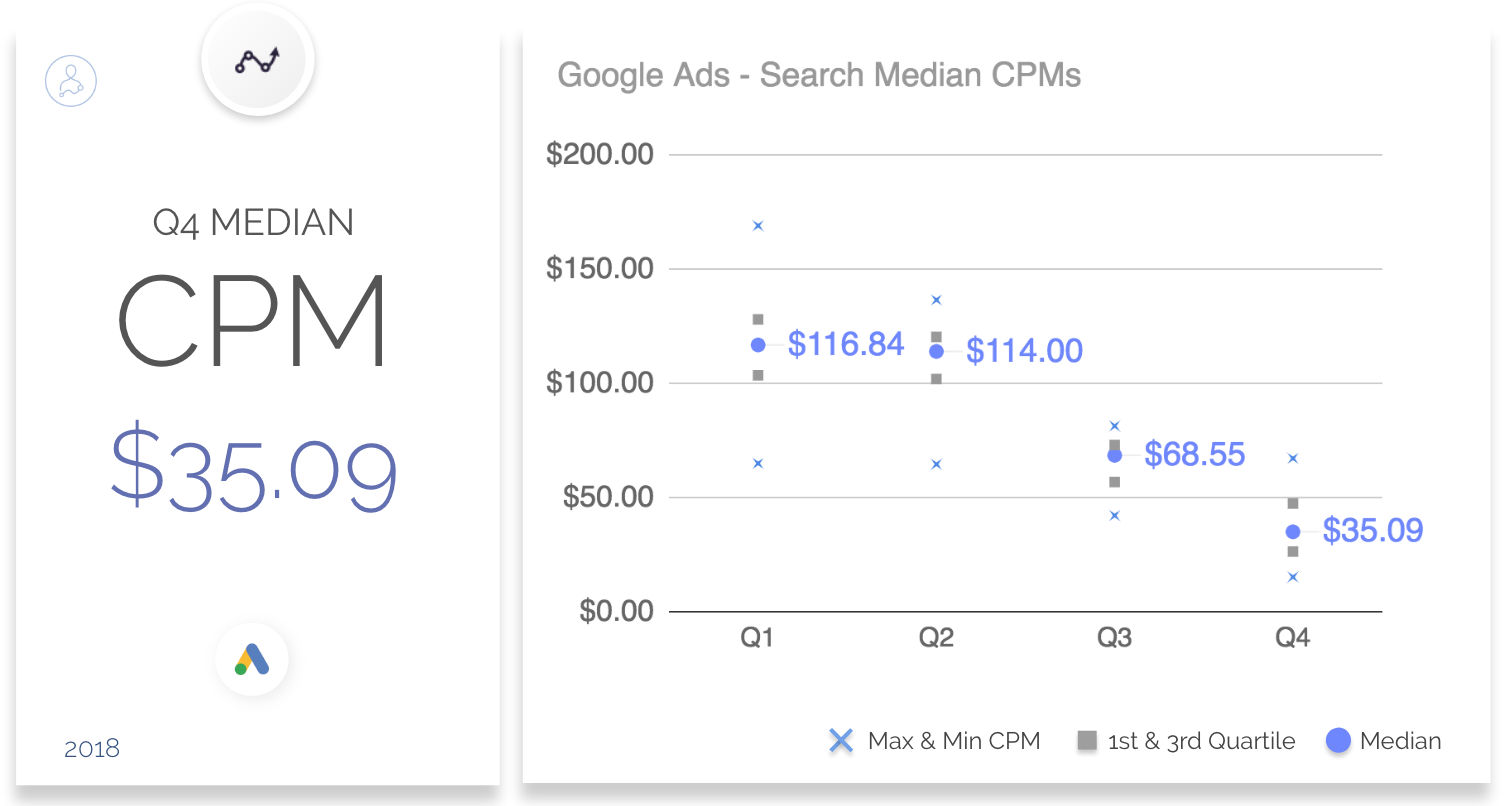 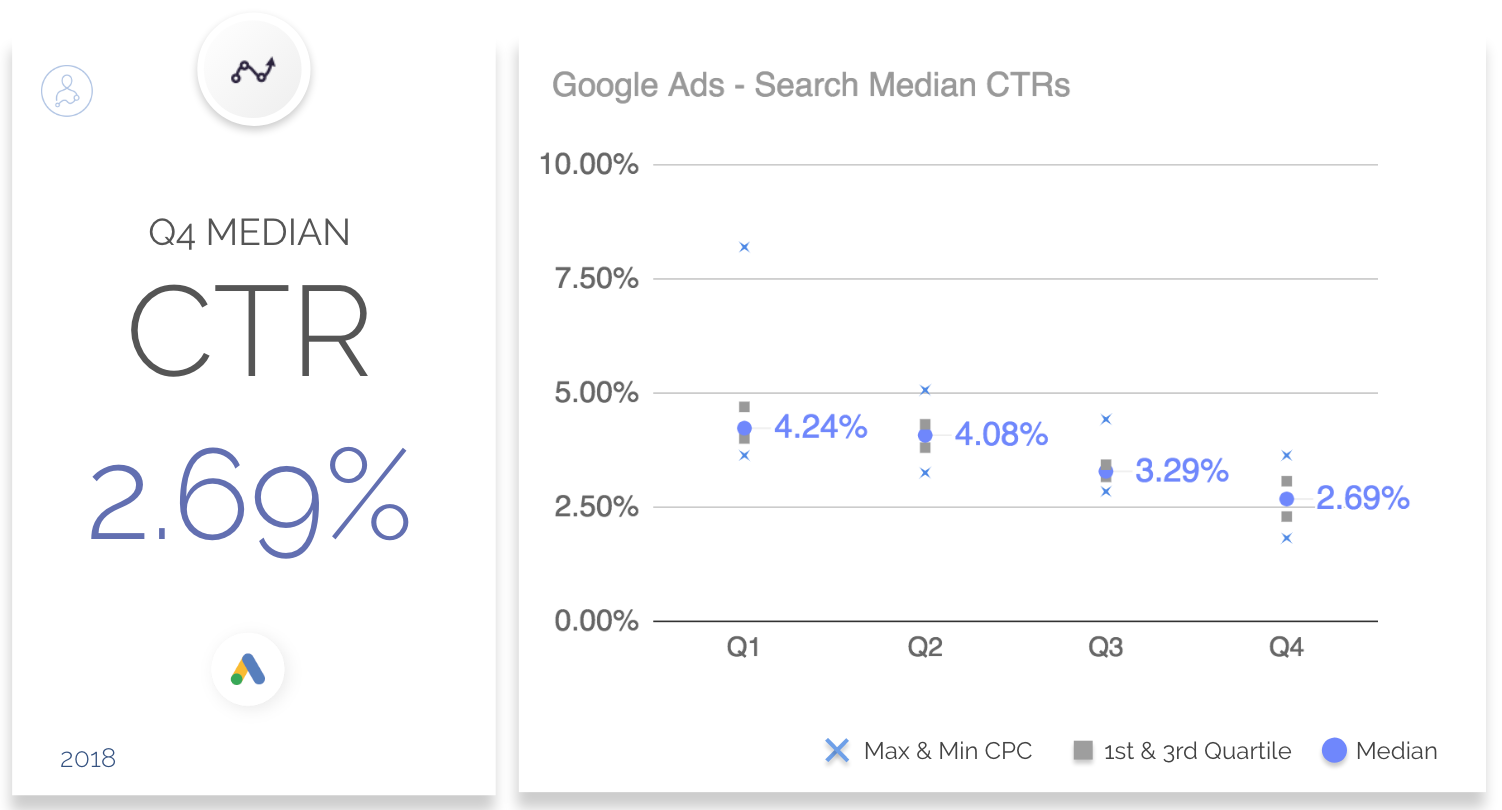 In Q4 2018, we analyzed over 2.2 billion ad impressions and nearly 9 million clicks for ads on Google Display Network.

Our calculations showed that median CPC added 5 cents to its total, and ended the year 5 cents cheaper than the same time last year. 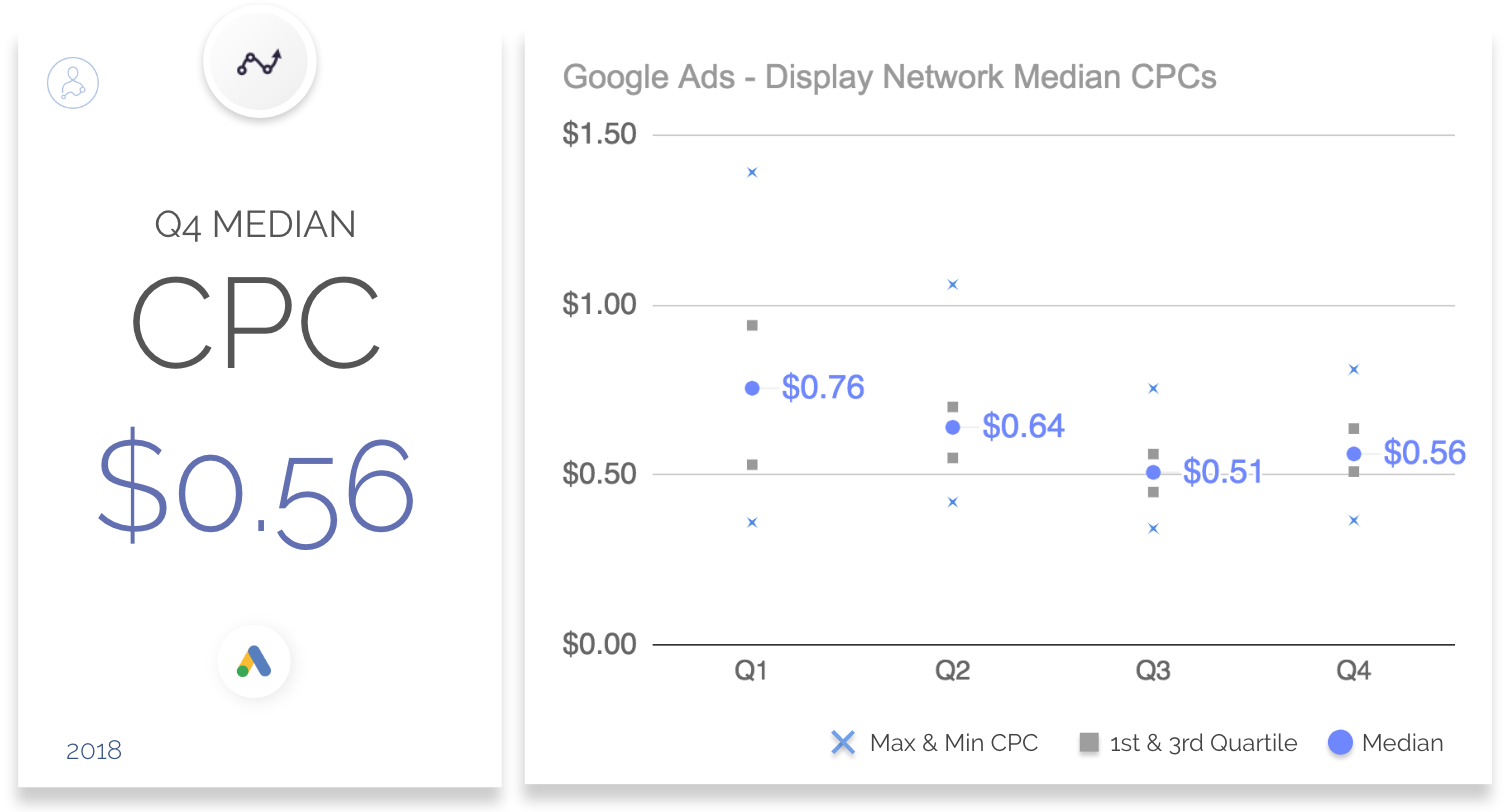 For Q4, we found that median CPM jumped up 13 cents from last quarter, but is 38 cents cheaper year over year. 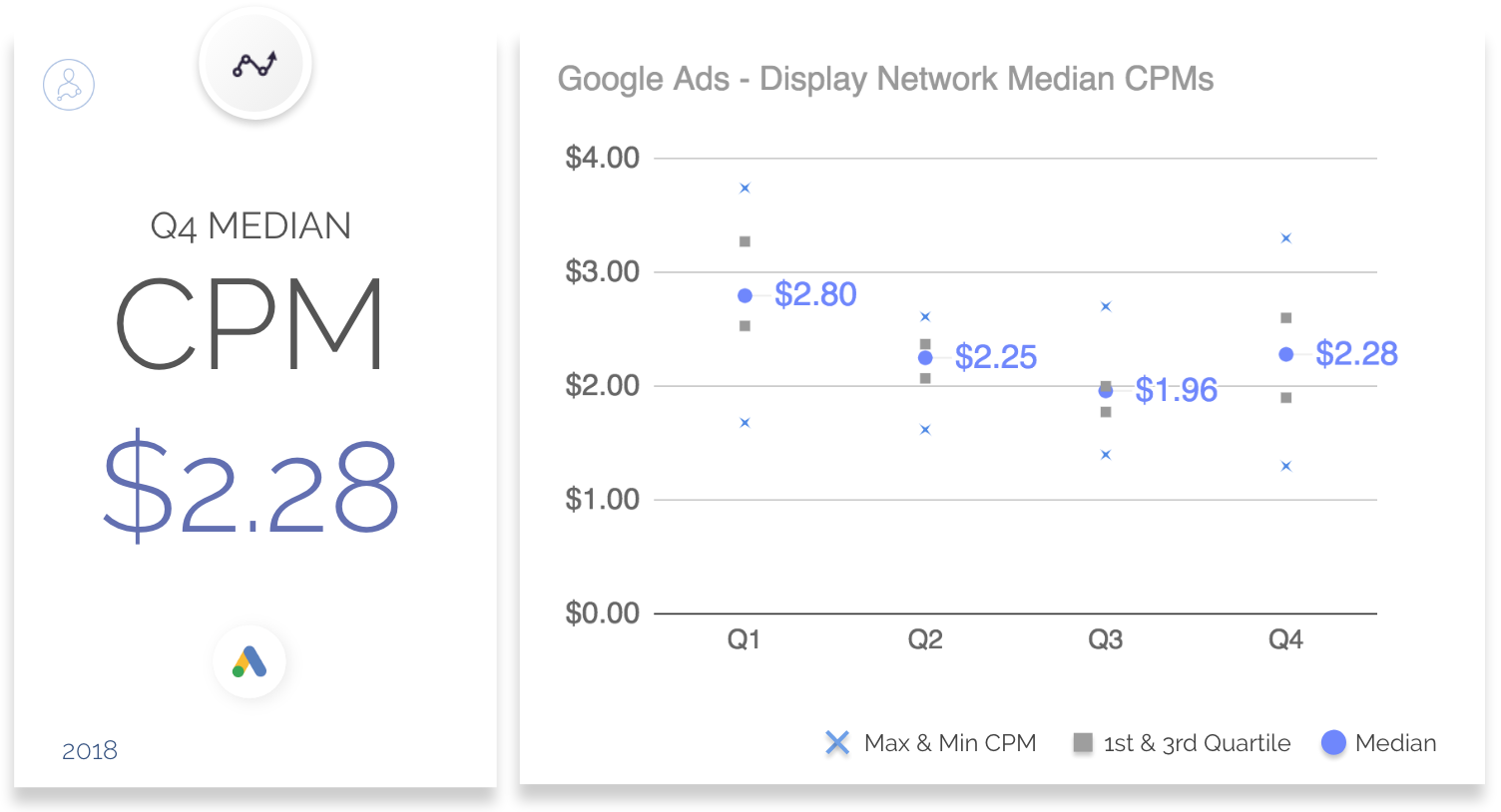 Median CTR for ads on Google Display Network increased slightly from last quarter, just .04%, and is nearly the same as it was in Q4 of 2017. 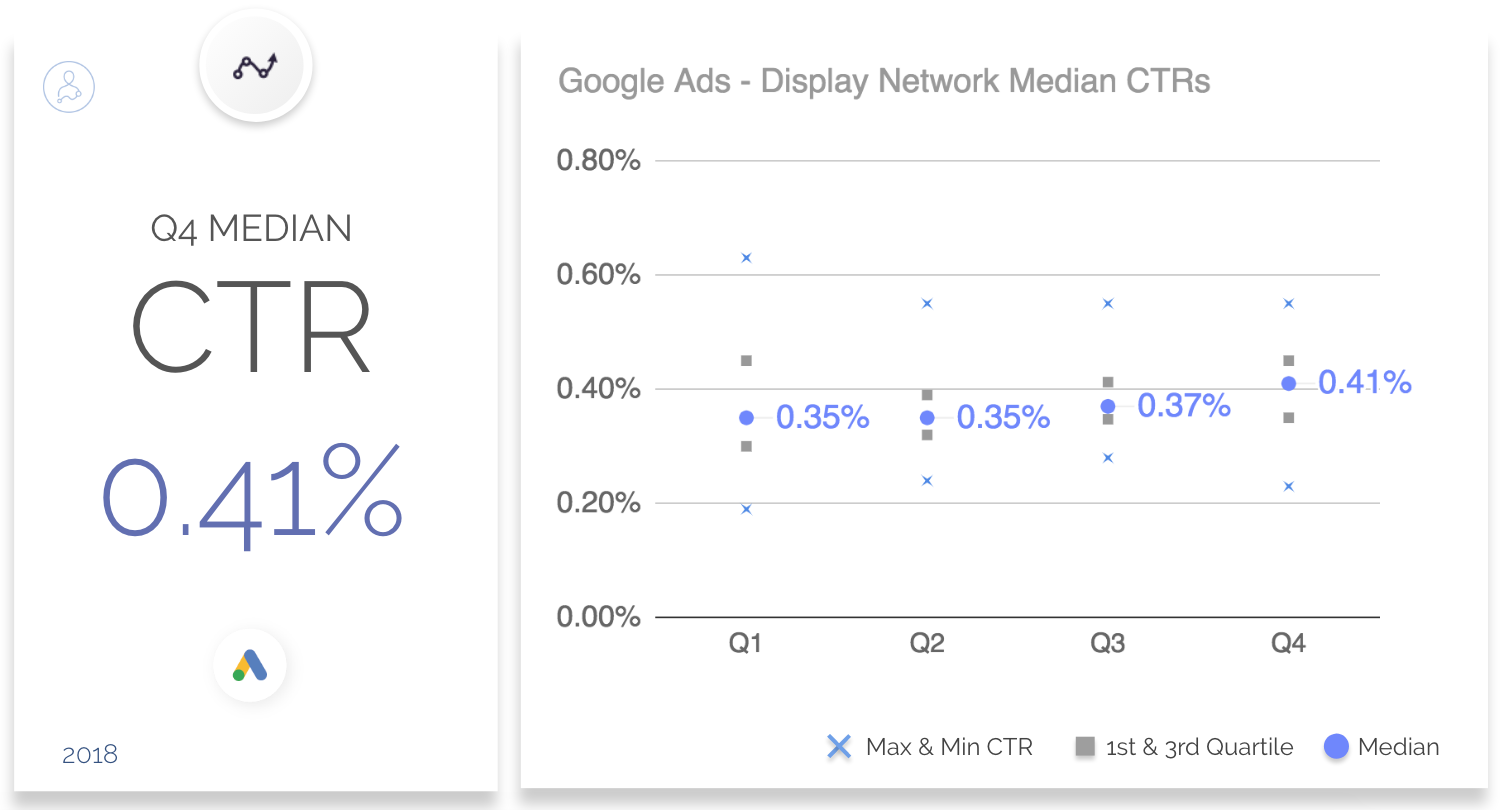 Features to bring more impact to Display campaigns. Google debuted three features aimed at reaching new customers that are all in some way powered by machine learning. Dynamic prospecting with product feeds serves up ads that show products based on people’s interactions on Google and publisher sites in the network as opposed to showing products based only on what people viewed directly on your site. The second feature, fine-tuned audience expansion, is used to manipulate reach to get more conversions at the same CPA. The third AI-powered feature announced in Q4 is auto-generated custom intent segments, which greatly reduces the time spent on keywords by offering up umbrella segments like “kids’ clothes” that include updated lists of the most common keywords for that theme. Google also announced an update to what marketers could opt to pay for when using Display campaigns. You can now choose to pay for conversions instead of clicks.

Updates to metrics for video and search. Many marketers find Google’s average position ranking confusing, which the company wants to make more clear with four new search ad position metrics. Impression (Absolute Top) % and Impression (Top) % help you determine when and where your impressions are showing above organic search results. The other two metrics Search absolute top impression share and Search (Top) IS indicate the available opportunity to show your ads in more prominent positions. In other words, how you can increase your bidding. Google says the metrics will soon be incorporated into automated bidding.

New measurement capabilities in Display and Video 360. They’re designed to help marketers understand viewability, reach, and brand lift across media sources and properties. With custom metrics in Display & Video 360 measured by Active View, marketers can use custom criteria like how long an ad must be visible to count as an impression. Unique Reach reporting measures the number of unique users and impressions-per-user so marketers can determine how often to advertise to someone without overloading them.

Expanded Brand Lift analytics. They now go beyond YouTube to include all video ads across media properties.

Read the Q4 2018 PPC Benchmark Report for additional ad performance trends on all the major platforms.