How To Set Up Your First Twitter Video Advertising Campaign

Something extraordinary happened on Twitter recently. It wasn’t the latest Trump tweet. Or an uproar over a dress.

Twitter turned a profit. After over a decade in business and five years since it went public, Twitter’s net profit in the fourth quarter of 2017 was $91.1 million.

And it just reported another quarter of profits. Two in a row!

So what’s to account for this change? It’s not user growth; that’s stayed fairly flat. It might be due in part to cost-cutting. Or the switch to 280 characters could have helped.

But the thing that’s really getting credit for Twitter’s sudden profitability? It’s video.

Video ads, specifically. They’re getting much of the credit for the Q1 2018 profits – profits Twitter says will continue all the way through this year.

Download AdStage’s latest Benchmark Report to see how much advertisers paid for clicks and impressions in Q1 2018.

The awesome power of video

As you probably know already, video is “eating the internet.” And you’ve probably heard that oft-quoted stat about how video will make up 80 percent of the world’s internet traffic by 2019. So may I remind you that 2019 is eight months away?

The age of video is upon us. And whether you like being on camera or not, it’s time to embrace it.

The good news, of course, is that you don’t have to appear on camera. And it doesn’t take more than 20-30 minutes to make a viable video (for reals: I will show you how in a moment).

And there’s every reason to start testing this new format.

Before we get into the weeds of creating and testing Twitter video ads, you’ll need to confirm they work with your overall content strategy. But given how many types of videos are being used already, it’s likely there’s a way to make this format work – and work well enough to justify paying for some promotion.

This could be highlights of an event, or perhaps a one-sentence clip of a speaker at an event. Or a cameo of someone at your event saying hi.

The key characteristic of these videos is that they are of actual people on film in a real setting, and they are expressly created to build buzz about a live event.

These could be short videos, but an animated gif might also work quite nicely. Think in steps for your how-to videos. And, of course, keep it simple: Any more than 10 steps gets confusing.

Want to give people a nutshell explanation of what your company does, or a specific service you offer, of a specific concept in your industry? You need an explainer video. These can be great for top of the funnel content that could engage a large audience.

It could be a promo video for a product or a service you offer. Things you might want to mention:

Got a new blog post? A new ebook? A webinar or an online conference you want to promote? Write a snappy summary, put it to video and watch the engagements rise.

These answer the question, “Why it’s awesome to work here,” or showcase one employee and what they do.

Can you tell a story in 6 seconds? Yes! Watch the fab TED Talk below about how stories can be distilled into six words. If six words can constitute a story, you can distill a video story into six seconds.

Of course, a 15 or 30-second video might let you tell a richer story… or you could use those first six seconds to set the story up, then get people to click through to a page on your site to hear the rest of the story. 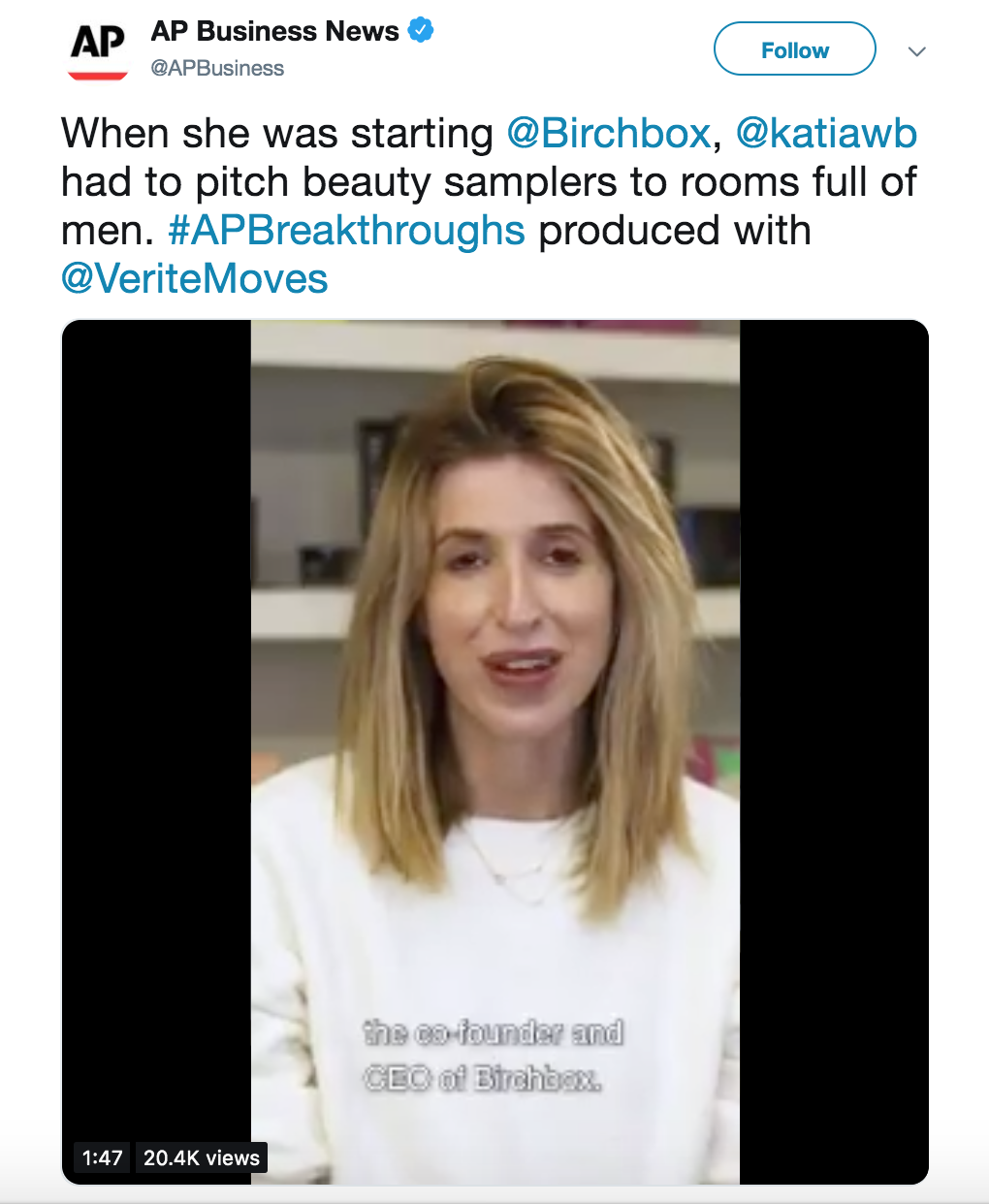 Are these a little self-serving? Only if they’re not done well. People (especially millennials) care about the ethics of the companies they work for or do business with. So capture your mission or some of the ideals you aspire to on a short video. 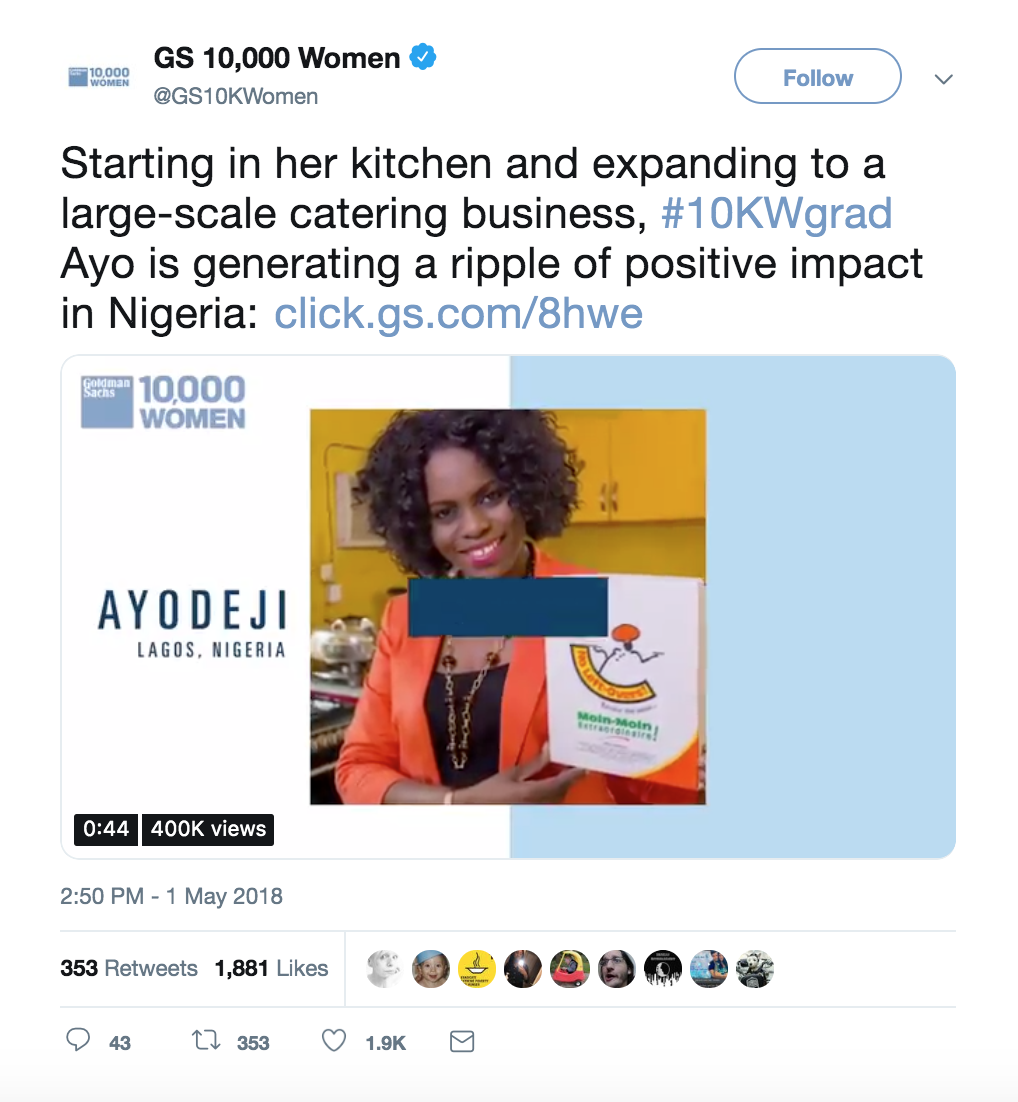 These may make more conservative companies uncomfortable, but fun office videos often get more engagement than any brand message you’ll ever put out.

Besides, this is social media – we’re supposed to act human and… social. So take a deep breath, show some personality, and make a fun video. Even if you can’t directly tie any ROI to it.

Twitter is the “micro-blogging” platform, right? So why not use it as the micro-vlogging platform.

A short “Friday thought”-style video, like the one from Dennis Shiao below, is terrific way to offer fresh content. 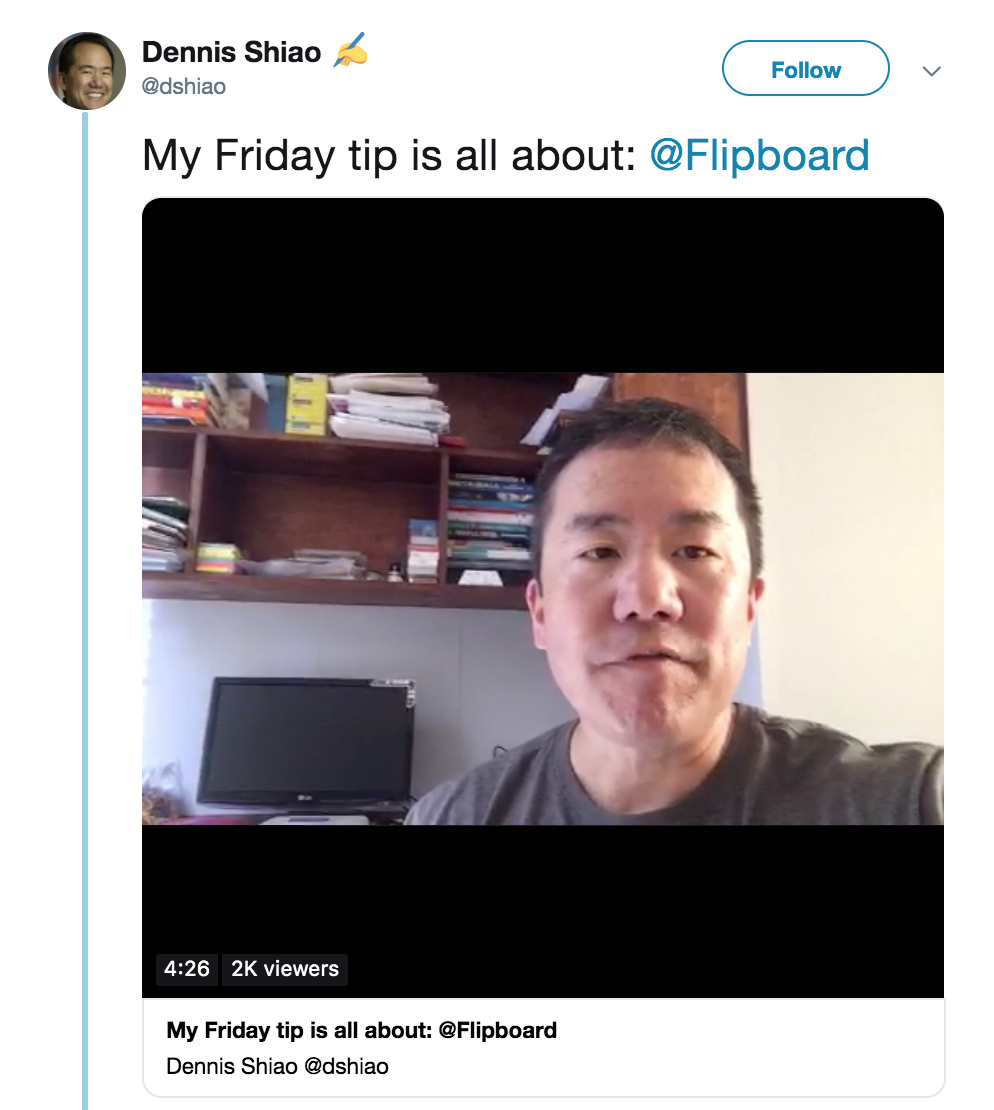 As you saw in the stats above, “native” Twitter videos perform best. Videos optimized for Twitter also perform far better than a video that was created for, say, YouTube, and then just gets uploaded for Twitter.

Here are the basic specs your Twitter videos should adhere to:

1. Target your ads to content that’s as closely related to the ad as possible.

Kinda advertising 101, right? Yep, but that doesn’t mean it’s not worth being said.

Twitter calls this relevancy “endemic pairing” and as they explain, “When In-Stream Video Ads are paired endemically — as when a sports drink ad appears in front of a sports highlight clip — higher brand impact is achieved across key brand metrics.”

Those of us who remember Vine (which was only a few years ago, for goodness sake) will recognize the six-second format. Six-second videos will also automatically loop on Twitter, which is an added bonus for your brevity.

Make sure your logo appears somewhere in the video within the first few seconds. But please, don’t waste 3 seconds of a six second or even a 15-second video with one of those long YouTube-style intros.

4. Make your video work without sound.

85% of videos played on Facebook are played without the audio on. Twitter users probably aren’t all that different in this regard.

So… no talking head videos without captions, at the very least. And you’d do better to use really simply strong graphics and images.

If you’ve been crafting messages for awhile, this is kinda a no-brainer, but it’s something we could all do well to tattoo on our foreheads: Simply your message. Nope – simplify it again. And again.

Simplify your message until it fits on a baseball hat… or inside a six-second video.

This is just due diligence. Don’t cut corners: optimize your videos for Twitter. It’ll pay off, as the chart below shows:

Here are some other specs you’ll need to know for optimized videos:

Twitter users have a particular affinity to animated gifs, and gifs can often do nearly as well as video content. In fact, once you start really looking at Twitter videos, you may be surprised to find that a third or more of them are actually animated gifs.

Just know this: Twitter doesn’t actually support GIF files. You have to convert them into MP4 files to upload them. Fortunately, there are plenty of free tools, like this one, that let you convert them quickly and for free.

If you are ready to appear on screen live, all you have to is

4. You’ll instantly be live, and as you record, Twitter will count the length of the video.

5. When you’re done, you’ll immediately be able to see stats on who viewed your video.

If you don’t want to appear in person, you can use any one of a hundred different video creation and editing tools.

It took me maybe 50 minutes total to create my first video, including the time spent to

Setting up the video ads

I chose to use promoted tweets for my video ads, so I tweeted out three different videos over the course of a few hours.

Here’s one of them:

Get #GrowthHacking tips from the best - Sign up for https://t.co/X0rxWnqDJ7 to hear 25 experts on May 14-18 talk about how they get their amazing results (and, sometimes, how they screw up)

Includes my talk, How to Write #Headlines That Get 59X More Results #growtheu pic.twitter.com/daKPtU8qzS

I created two campaigns with identical settings other than one campaign was a “promoted posts” campaign optimized for website clicks, and the other was a

Here's what I did for each campaign:

3. Chose three creatives, and then turned off Twitter’s network partners, so the ads would only show on Twitter profiles and search results.

4. Set the targeting for a couple of relevant countries and added one interest for “Marketing”. Then I added “ follower look alikes” for about seven Twitter accounts whose audiences would definitely be interested in the ad. Finally, I included my own followers as well.

One thing that I did not do – and that I should have – is to add a trackable link (like a Bit.ly) link to the video views posts. That way I could have known how many clicks my video views ads were generating.

The results were interesting, though a little premature to make any definitive claims about.

I got video views for 2 cents each, with a 29.52% view rate. Over just the course of a three hours, the video views campaign accrued 1,433 views.

The link clicks campaign did not work as well. I paid $3.57 per click, which is very high compared to the average cost per click of 38 cents for ads in Q1 2018, according to AdStage’s Paid Media Benchmark Report.

Interestingly, the same piece of creative did best for both campaigns. So if I was to continue this experiment, I’d

But just for a start, I got promising results. It’s a little hard to compare this to what I might pay on Facebook or YouTube for a video view, as Facebook measures a video view when someone watches at least 3 seconds of a video, whereas Twitter measures a view as when the video is watched for at least 2 seconds.

To give you a better idea of how Twitter’s video metrics compare, refer to this table: 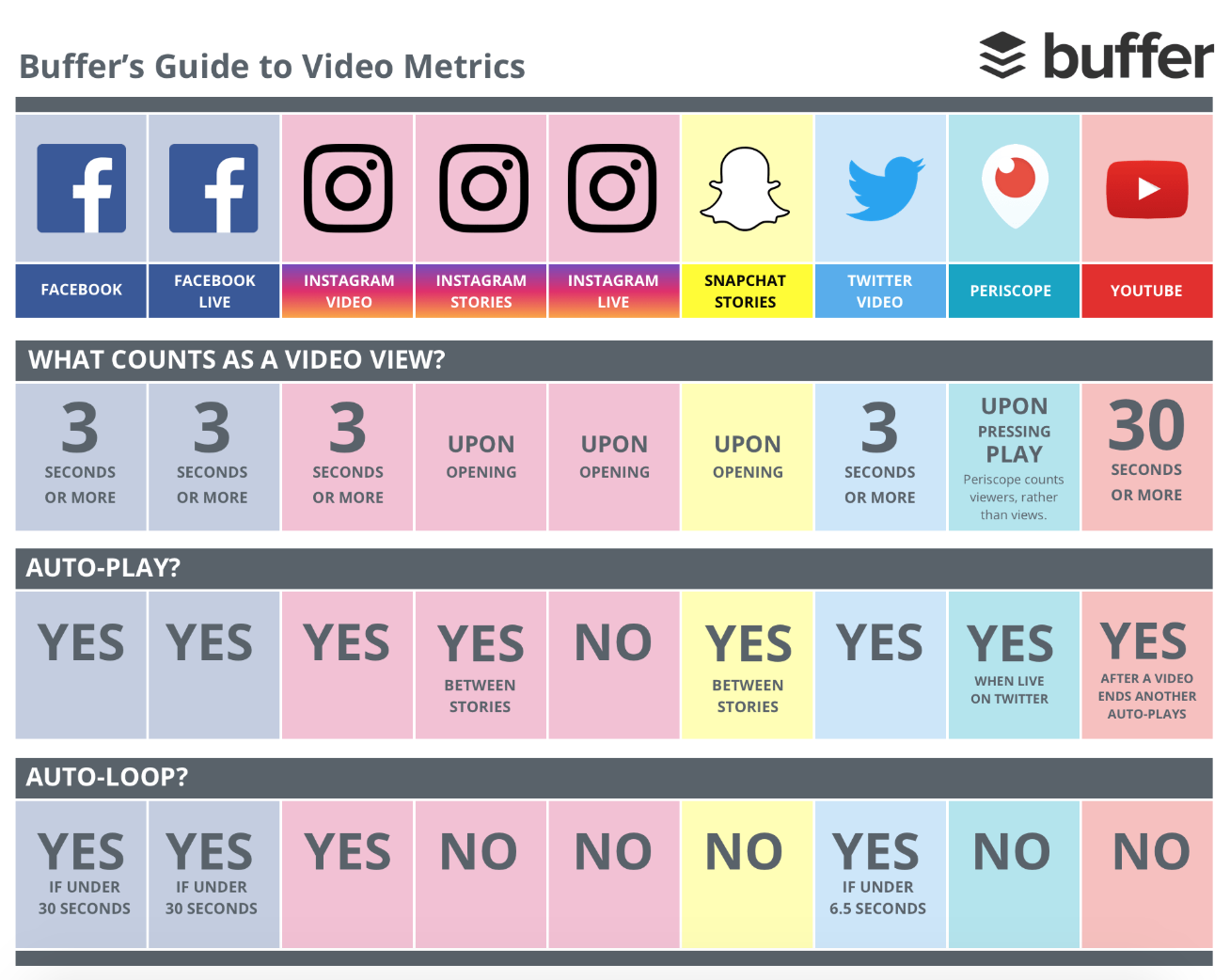