Google CEO Sundar Pichai started the year calling YouTube a key contributor to Google’s rise in fourth-quarter revenue, though he didn’t offer many details beyond that. Perhaps it’s because YouTube recently reached a milestone of almost 2 billion monthly logged-in users. Many analysts predict Alphabet, the parent of both companies, sees this large audience as a great opportunity to push its subscription services like YouTube Music, and YouTube TV, the latter becoming increasingly important as online channels become a replacement for cable TV (check out the Trends section below for more on that).

Keep reading to see what we found out about YouTube when we analyzed over 224 million ad impressions and nearly 565,000 clicks for ads on the platform. Be sure to read the Q4 2018 PPC Benchmark Report for additional ad performance trends. Check out our Benchmark Report page for the latest reports by quarter.

For Q4 2018 we found that median CPC for YouTube increased 16 cents from last quarter, but is 65 cents cheaper than where it was at the end of 2017. 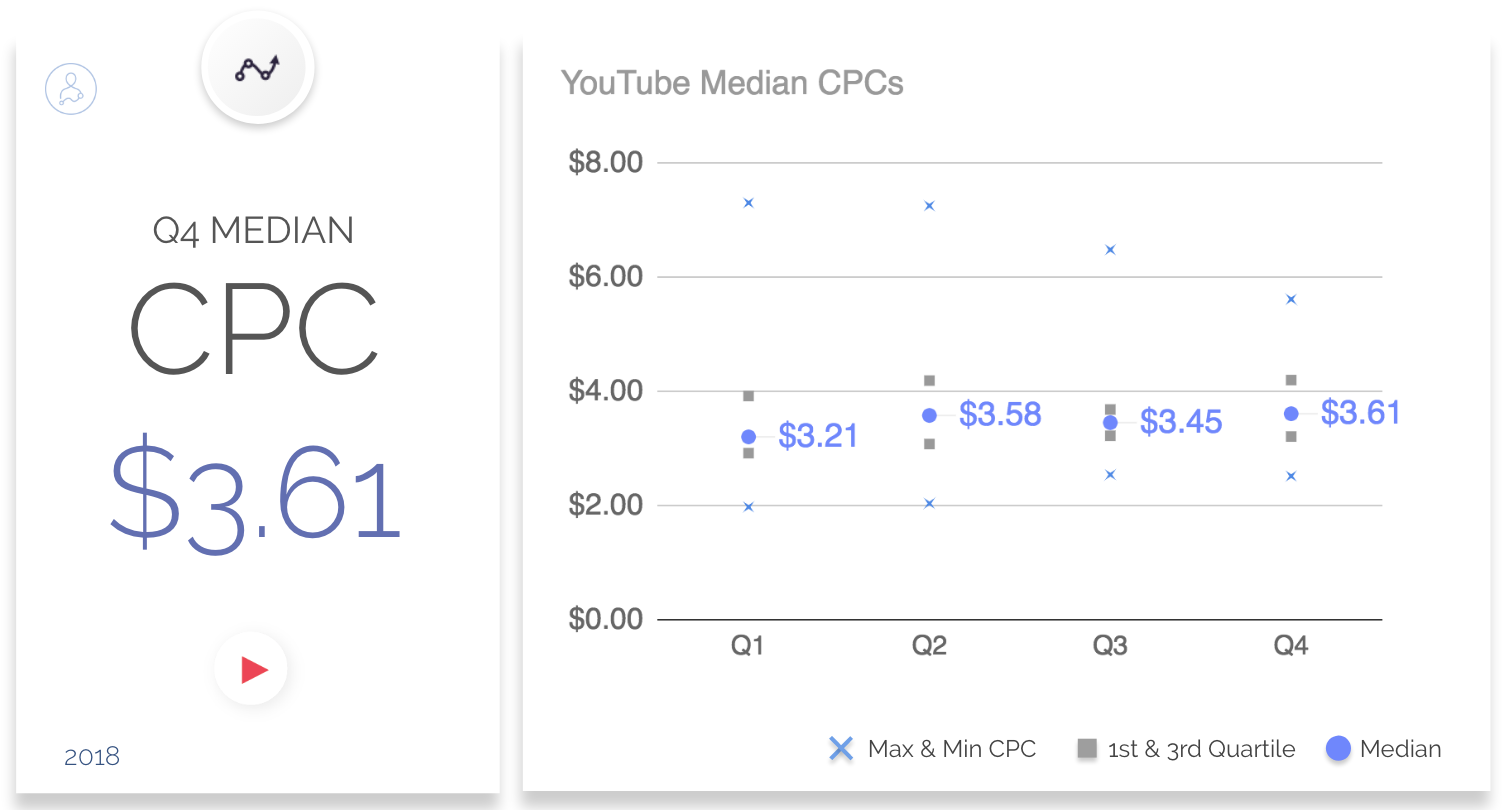 According to AdStage calculations, median CPM dropped 22.8% from last quarter and is down $2.26 Y/Y. 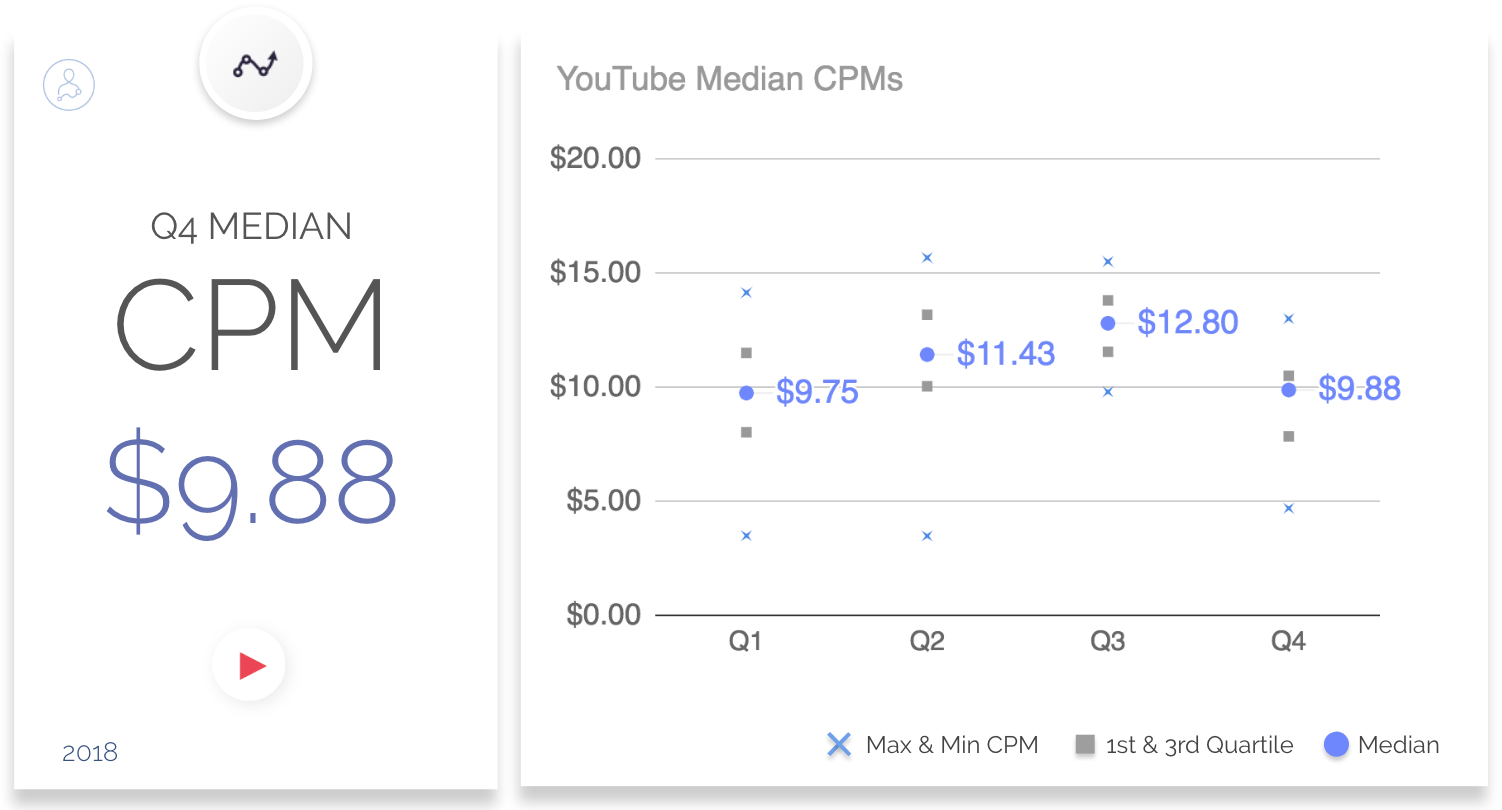 Median CTR for ads on YouTube ended the year at the lowest we have on record, dropping 0.11% since last quarter. Year over year, median CTR is down .04%. 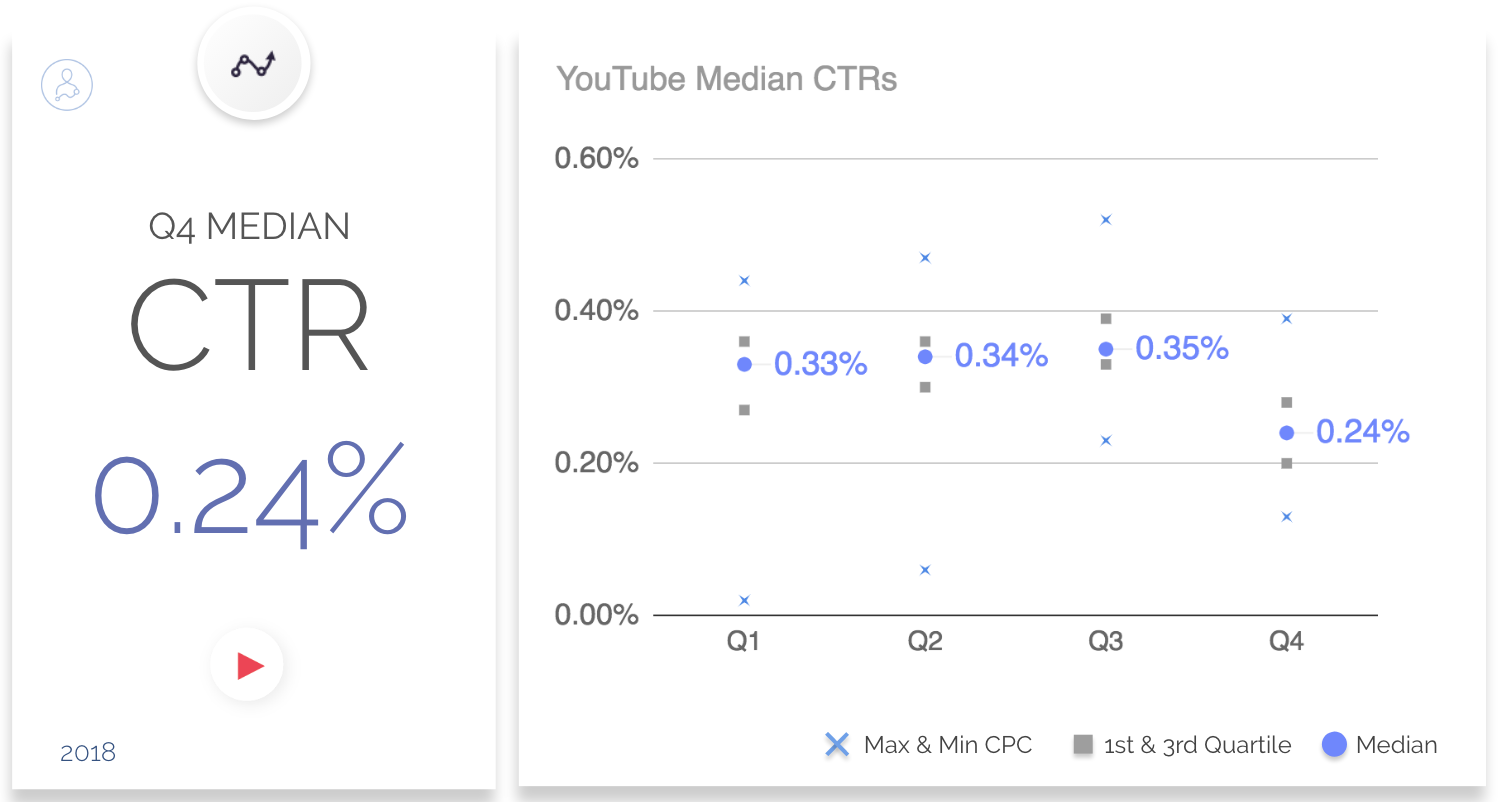 Changes to engagement measurements for TrueView. Now, YouTube counts an ‘Engagement’ whenever a user clicks or watches 10 seconds or more of a TrueView for action ad, rather than 30 seconds when using maximize conversions or target CPA bidding. A ‘Conversion’ is counted when a user takes action on an ad within 3 days of an Engagement as opposed to the previous default of 30 days. Google said the changes are intended to give marketers faster ramp-up times for target CPA campaigns and more up-to-date reporting.

New ad extensions + the intro of “lifted users.” The additions include call-to-action overlays that can be layered on an ad as opposed to baked in, and extensions that encourage “lower-funnel actions” like searching upcoming movie showtimes, downloading an app, or booking a hotel stay. With the extensions, YouTube also announced an evolution in its Brand Lift capabilities, allowing marketers to set up Brand Lift studies directly in Google Ads or Display & Video 360, delivering near real-time data thanks to continuous Brand Lift surveys throughout a campaign, and introducing two new metrics—lifted users, the number of people who were influenced by your ad, and cost-per-lifted-user.

180 million hours+ of YouTube viewed on TV screens daily. This internal data from Google reveals the TV screen as a hot commodity for the video-focused platform. To help keep marketers on top of the growing opportunity, YouTube TrueView and bumper ad campaigns started targeted TV screens by default, followed a few months later with the capability to get reports through AdWords API.